Krystal Nielson was the designated, raspy-voiced villain on The Bachelor this season and she was vying for the heart of star Arie Luyendyk Jr., but she apparently was hoping the Bachelor was someone else. In an interview with Glamour, Nielson admitted that, “The audition process is very long, and for 90 percent of it, I thought it was going to be Peter. I found out a week and a half before [it wasn’t]. I gave up my whole life, my career that I love so much thinking it was [going to be] someone else.” Nielson then said that, “Of course I felt disappointed, but at the same time I was very intrigued with Arie because I didn’t know anything about him. He seemed like such an eligible guy and down-to-earth. I was like, ‘I’m going to give him a shot.’ And honestly, Peter knows he’s hot. Can you imagine what that season would be?!”

On the Women Tell-All episode of the show, reportedly, contestant Jacqueline insinuates that Nielson really wanted Peter Kraus to be the Bachelor. But that’s not the only time during the reunion show that Nielson is put under the microscope. According to Reality Steve, “Bekah M. and Krystal were basically friends up until Tahoe, then they weren’t. Chelsea also said she thought they were friends, but when she watched the show and saw the things Krystal was saying in ITM’s, she realizes they weren’t. The consensus seemed to be that Krystal is a hot mess with zero self awareness.”

Nielson also gets shut down by Luyendyk, so she didn’t really have any allies on the show anymore. Even production took part in outing Nielson, as Reality Steve revealed that, “They show never before seen footage, and it’s of her in the bathroom in Ft. Lauderdale talking to Maquel. Either the water was running or a blow dryer was on, something to where they thought they were speaking privately and mics couldn’t pick up the sound. But it did, and you see Krystal telling Maquel that Arie basically allowed the losing team on the bowling date to join in so ‘he could make out with all the c*nts.’ She also called Arie a ‘needle dick.’” When speaking with Entertainment Tonight, Nielson talked about her feelings on the never-before-seen footage, saying, “I did not not [remember saying that]. Honestly, I was having an intimate conversation that was caught through the peeping fucking tom of my hotel room, while I’m in the bathroom, and it was caught through the room. I was talking to my roommate, and I was angry and I was hurt. I was very upset, and I was entitled to be that … So do I regret it? I mean, I do … I said things out of hurt, [but] looking back, who doesn’t when they’re pissed, you know?”

Reading the comments on my posts over the past few weeks has been eye opening to say the least. The negativity and cruel words about my character and my appearance is something that I’ve never dealt with, especially not on a public platform. I let it get to me and I let it affect my sleep, my relationships with others and my passion for doing the work that I love. A close friend of mine gave me some good advice: to not delete the negative comments because it’s a part of my journey- thanks @heatherlysmith . As tough as it was at times filming the show, I’m so thankful for the experience because it’s allowed me to grow. I’m learning to take the good with the bad and becoming stronger as a result. I was humbled and thankful for the support that @oliviacaridi and some of my followers showed by taking a stand against bullying. I choose to stand up and say that negative words do not have power over me. I will not be a victim and I will not bully back. #notme @j_webs_photography

Nielson also defended herself to People, saying she has made her peace with the situation but that, “It got to a point where I realized that I can’t control how I’m going to look on the show, so there’s no point exhausting my energy.” She said that the bowling date (after which the footage was reportedly taped) was her breaking point in the relationship with Luyendyk. In an interview with E! News, Luyendyk also confirmed that he felt the relationship went downhill in Ft. Lauderdale. He dished on their breakup, saying that, “It was difficult in the moment. I think now because I’m seeing the other side of things, yeah, people are like, ‘Wow, why did it take you so long?’ And it’s only been because our relationship was actually really good. It was probably around Fort Lauderdale when things started to break down.”

Reality Steve also added that, “When Arie came out on stage, two relevant things happened. One, Krystal wanted to come up there and sit next to him, which she did, but Arie pretty much shut her down. She was upset and wanted more of an explanation, he told her she deserved to go home, especially once he saw it play out on TV. He also said he kept her too long. Apparently Arie was cold and short with her, which apparently delighted the crowd because she was insufferable the whole time.” Though Nielson told Glamour she got where Luyendyk and the other women were coming from, she says she doesn’t feel her side was understood.

Over the weeks, Nielson has had a hard time with the backlash she has received, explaining to Glamour that, “What really hurt was people saying I was fake and disingenuous, and I wasn’t. It was a really challenging process for me and harder than I anticipated. I tried to approach all of girls when there was a confrontation, and I felt very hurt that they all talked shit behind my back about me but never to my face. So many times I expressed to them to please come talk to me because I never wanted to hurt someone. It sucks that I did hurt [people] because I never wanted that at all.” Unfortunately for Nielson, she left this experience feeling misunderstood, but she appears to be fine in moving forward, using positivity to light her way. 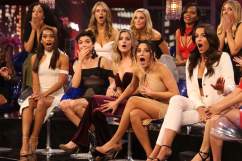