Playboi Carti, whose real name is Jordan Carter, was born in Atlanta, Georgia. He is a rapper, perhaps best known for his single, “Magnolia,” which reached No. 29 on the Billboard Hot 100 in December 2017.

“Carti’s style of rapping is spare and repetitive, more concerned with flow and catchy phrases. Two of his most high-profile features came in October 2016, on ASAP Mob’s debut album, and the songs—’London Town’ and ‘Telephone Calls’—are representative of his solo material. He likes to emphasize the end of his short bars, often with a single word, like yeah. What he has in place of bona fide hits are patience and taste and charisma and gumption and a strong sense of fidelity,” Complex reports, describing his style.

The 21-year-old’s name has been all over the internet after a sex tape video of his ex-girlfriend, Blac Chyna, leaked online.

Playboi Carti is currently on tour and hasn’t uploaded anything to his social media accounts in several weeks.

1. He Dated Blac Chyna & Some Think He’s in Her Sex Tape Video That Leaked Online

Playboi Carti and Blac Chyna were first linked together in October 2017. The two dated for about three months, before breaking things off in January, according to Who’s Dated Who.

On February 19, someone leaked a sex tape video of Blac Chyna on the internet. The video is a little over one minute long and shows Blac Chyna performing oral sex on an unidentified male. It appeared as though the video was taken by the male, perhaps via a cell phone.

Chyna and the unidentified male whisper to each other in the short clip, but it is unclear who the man is. The internet seems to think that it’s Playboi Carti, perhaps because he is the last man that Chyna was with before this tape leaked.

Chyna’s ex, Mechie, has come forward claiming that he is the male in the video. A rep for the Vine star told TMZ that Mechie filmed Chyna giving him oral sex using her cell phone. To his understanding, there was only one copy of the video (on Chyna’s phone), so he is unsure how it leaked.

2. He’s a Rapper & Is Currently on Tour With Gucci Mane

You may remember his very first song, “Broke Boi,” which was released in 2015. The song ended up getting him quite a bit of attention and he got an offer to sign with A$AP Rocky’s AWGE and Interscope Records.

In 2016, he was featured on “Telephone Calls,” a single released by A$AP Mob.

Last April, he released his very first mixtape, which was received excellent reviews in the music world. His name was featured in several publications from XXL Magazine to Spin, and the mixtape ended up making it all the way to No. 12 on the Billboard 200 on May 6. His two most successful singles were “Magnolia” and “Woke Up Like This,” featuring his pal, Lil Uzi Vert.

Carti is currently on tour with Gucci Mane and Dreezy. According to Carti’s website, he has scheduled tour dates all over the world through the end of the summer.

Not long ago, Carti was a student at North Springs Charter High School in Sandy Springs, Georgia. He told Complex that he would often skip class to record music or to go work at his job at H&M.

While he was in school, he got hooked up with Atlanta rapper Fat Man Key, who ended up mentoring him. That relationship helped Carti kickstart his career. Fat Man Key got Carti involved with indie label Awful Records, and his career blossomed from there.

“From there, he moved to New York, cozied up to ASAP Mob, and eventually made a deal with Interscope. Now he’s living in Los Angeles, preparing to drop his long-awaited, self-titled debut mixtape,” reports Complex Magazine.

“I went from bagging groceries to working at this place called H&M. But look, in Atlanta, when it first popped off, I was the hottest ***** at [H&M], ‘cause I was still in school,” he said in a candid YouTube video.

4. He Used to Be a Model & Is Often Recognized by a Large Birthmark on His Face

Playboi Carti has done some serious modeling over the past several months. Although his passion is music, he also has an eye for fashion and is a fan of huge brans like Balmain, despite “always” being a “thrift store kid.”

His style hasn’t changed too much, however, as he still sports jeans and a T-shirt regularly.

His passion for fashion has landed him some fairly incredible opportunities — like walking in a Yeezy fashion show.

“He was in the Yeezy Season 5 show, performed this past season at VFiles with rapper Lil Uzi Vert, and made a cameo in one of Drake’s OVO lookbooks. During New York Fashion Week: Men’s, he headed over to Raf Simons’s first New York show with A$AP Rocky. ‘That felt like the first time [at a fashion show]. That one was the real deal; it felt amazing,’ he says. ‘I met Raf, and I got the butterflies,'” Vogue reports.

Carti has a large, oval-shaped birthmark on the side of his face, which has become one way that fans recognize him.

In July 2017, TMZ reported that Playboi Carti was arrested outside of Los Angeles International Airport. At the time, police say that he was arguing with a woman — later identified as his girlfriend of three years — while exiting the terminal.

“We’re told they began pushing each other, then he pushed her outside, grabbed her backpack and forced her into an Uber. Carti was arrested shortly after the fracas for misdemeanor domestic battery. The woman was not arrested. He posted bail of $20k and was released early Friday morning,” TMZ reported.

The following month, the charges were dropped. 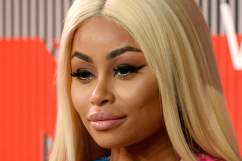