A Quiet Place is the newest horror movie to hit theaters and it’s looking to bring a unique brand of terror with it. Directed by John Krasinski, A Quiet Place is a truly horrifying film that uses sound in a unique and tense way. Yet, there are some important and subtle details that you might miss if you’re not paying attention or went to the restroom. Below we will go over the basic premise and explain the ending of A Quiet Place. There is no post-credits scene of any kind for this film.

A Quiet Place is set in the present after an unknown wave of beings ravished the planet. With most of the human population exterminated, the remaining survivors must live day to day as quietly as possible. This is because the monsters are completely blind and hunt entirely by sound. Our story follows a family living somewhere in rural America over 400 days after the otherworldly beings presumably arrived. The family consists of the young deaf girl named Regan, her little brother Marcus, their mother Evelyn, and father Lee.

The majority of the movie is set a year after the family loses one of their children to the monsters. Now living on a farm, they spend each day harvesting, laying out sand tracks for them to walk on, trying to reach the outside world, and scavaging for supplies. Evelyn is pregnant and on the verge of delivery, which the family has prepared for by creating a sound insulating basement. A Quiet Place spends the rest of its runtime focusing on the family’s interactions with these creatures and learning to move past their loss.

When A Quiet Place’s third act kicks in, Evelyn has accidentally drawn one of the monsters to their farm by screaming out after she stepped on a nail. Lee and Marcus are returning home after collecting some fish from the river and Regan is away at her brother’s grave. When the monster arrives Evelyn goes into labor and ends up in the bathtub trying to remain quiet despite the tremendous pain. The two returning home notice that their perimeter lights are on, indicating that a monster is on their property. Marcus is instructed to go set off some fireworks and Lee heads towards the house with a shotgun.

Right before the being can sense Evelyn is nearby, the fireworks explode and cause the creature to investigate the sound. Lee then finds his wife hiding in the shower with their newly born child. He takes them to the basement, putting their baby a wooden box with an oxygen mask strapped to his face so he can breathe. Lee then swears to Evelyn that he will find their children and bring them back safely. He rushes to their small control room that has monitors for the various cameras around the farm, hoping to spot his kids.

Meanwhile, Marcus is chased through a cornfield where he eventually knocks himself out by running into a tractor. Regan has made her way back to the farm after seeing the fireworks in the sky, discovering the area that Marcus ran through. However, a monster appears behind her, but before it can strike the malfunctioning hearing aid she wears lets out a high pitched sound. This noise causes the monster to shriek in pain before running off into the cornfield. She then finds her brother by the tractor and the two climb on top of a large grain silo.

While waiting to be rescued by their father, Marcus falls into the silo and is eventually rescued by Regan. The monster attacks one more time, but her hearing aid malfunctions once again causing it to temporarily retreat. Sadly, the monster retreats back to the house where Evelyn is and after a brief confrontation, she manages to escape with the baby unharmed. This beast then goes back to hunting Lee, Marcus, and Regan out in the farmlands. It manages to catch up with them, prompting Lee to hide his children in a nearby parked truck.

However, the monster hears Lee and slashes across his chest with its claws. Marcus yells out for his father which shifts the creature’s attention to the truck. Now right on top of them, the monster desperately tries to break into the vehicle and kill the kids. Lee, seeing no other choice, tells his children that he loves them and yells out. Marcus pulls the emergency brake on the car letting it roll away as they watch their dad get killed by the being. Evelyn also watches this happen via the monitors on the wall. The truck rolls down the hill and stops right in front of the house. Evelyn runs to her children, embracing them and mourning the loss of Lee.

Their reunion is cut short when the monster returns, forcing them to hide in the control room with the baby. This creature follows the family downstairs, cornering Marcus and the baby. Yet, right before this being can kill their newest family member, Regan turns on her hearing aid and puts it to a microphone by their radio. To the family’s surprise, this amplified high pitched screech incapacitates the monster. With the creature down, Evelyn and Regan assume that it’s dead. However, this isn’t the case and it attempts to attack the family one last time. Regan uses her hearing aid again to stun the beast, but this time Evelyn blasts its face off with a shotgun.

A Quiet Place ends with the family realizing they finally found a way to defeat the monsters. The gunshot has caused more of these beings to arrive on the farm, but this time they know how to stop them. Instead of hiding, Evenlyn loads the shotgun and Regan gets ready to turn her hearing aid on again. They no longer fear these beasts and presumably kill all of them so they can live safely on their land.

While A Quiet Place never explains where these beings came from, it’s eluded too that they are aliens. There are multiple references to space throughout the film and even a newspaper clipping describing the beasts as “Angels of Death.” It’s possible they are demonic, but A Quiet Place doesn’t showcase any religious iconography that would suggest this idea. Up until the final minutes of the film, we assume these creatures are unkillable since they’re armored. However, the frequency causes their armored skin to open up, exposing their soft, vulnerable flesh.

We can also assume that Evelyn shares this information with others since we see multiple beacons lit earlier in the film. Unless we get a sequel we may never know if humanity finally brings the fight to these monsters. A Quiet Place is not only about learning to accept a loss but understanding strength in your perceived weaknesses. Throughout the entire movie we see Regan grapple with not being able to hear. Her biggest struggle turns out to be the one thing that saves her family. The movie ends on a positive note and leaves the impression that this is a turning point for them.

The family is no longer being hunted, but are the hunters. 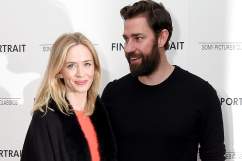