Real Housewives of New York City viewers got to know Luann De Lesseps’ ex-husband Tom D’Agostino, from the beginning of their courtship, to walking down the aisle. Fans are also getting a front row seat to watching De Lesseps’ marriage crumble and her life suffer, as she struggles to recover from a divorce. In a sit-down with Andy Cohen, according to People, De Lesseps previously admitted to being blind to the red flags that plagued her relationship with D’Agostino.

Since the divorce, D’Agostino still has been a major topic of conversation, as his divorce to De Lesseps is a focus on RHONY. And, some of the housewives still run into him. Get to know more about what D’Agostino is up to lately, who he keeps in touch with and what reportedly ended his marriage to De Lesseps.

1. De Lesseps Has Said She Still Keeps In Touch With D’Agostino

Even though it may appear that De Lesseps and D’Agostino would have bad blood between them, De Lesseps has admitted that she still keeps in touch with her ex, as reported by Celebrity Insider. De Lesseps revealed that, “Tom and I are cordial, but we do not have children, we were not together a long time … but he is doing his thing, and I am doing mine.”

De Lesseps also said that, even though her fellow RHONY co-stars were very negative about her relationship with D’Agostino, they have been very supportive of her since the split. De Lesseps told Celebrity Insider that, “After all the women said about me marrying Tom and etcetera and the joy … the marriage … the problems … the divorce … I really should’ve felt like they were going to say, ‘I told you so.’ But you know what I love? They didn’t really do that. They were not, like, ‘I told you so.’ They were like, ‘Aw. We are here.’ It hurt enough … I think the housewives realized it hurt enough to go through what I have been through, so the last thing I wanted to hear was, ‘I told you so.’” De Lesseps said that even though the marriage was brief, she does not regret it.

When the couple first split, De Lesseps and D’Agostino’s friend Dorinda Medley, who also stars on RHONY, went to bat for the couple, telling Us Weekly that, “It’s always a sad thing when a marriage doesn’t work and I hope everyone respects their privacy during this sad time. I wish them both the best.”

2. D’Agostino’s Cheating Ways Followed Him Through His Marriage

RHONY: Where Did It Go Wrong With Tom? (Season 10) | BravoLuann de Lesseps and Dorinda Medley discuss the demise of Lu's marriage to Tom D'Agostino. ►► Subscribe for More: http://bravo.ly/Subscribe ►► Visit the Official Site: http://bravo.ly/Official ►► Watch RHONY on Bravo! #RHONY FOLLOW RHONY ON SOCIAL: Official Site: http://bravo.ly/RealHousewivesofNewYork Full Episodes & Clips: http://bravo.ly/RHONYVideos Facebook: http://bravo.ly/RHONYFacebook ABOUT RHONY: This season on The Real Housewives of New York City, Bethenny is healthy and happy, and the little pieces of her life are coming back together now that she is finally divorced—but a feud with Ramona threatens her peace. Meanwhile, age is nothing but a number as Ramona celebrates her birthday looking better than ever. She’s dating and teaching the other ladies how to pick up men. After taking some heat for living in Bethenny’s shadow, Carole makes a strong effort to build her relationship with the other women, leading to some surprising connections. Tension between Dorinda and Sonja is at an all-time high, with Sonja making accusations about Dorinda’s personal life. Dorinda may forgive, but she never forgets. Sonja is caught in a love triangle and must decide whether to go with the man who moves her heart or the man who moves her other parts. And new housewife Tinsley Mortimer, still reeling from a shocking run-in with the law, returns to the Big Apple, where it all began for her. Tinsley's ready to start her next chapter, but will the girl who once had it all get it all back again? GET MORE BRAVO: Follow Bravo: http://bravo.ly/Twitter Like Bravo: http://bravo.ly/Facebook Pin Bravo: http://bravo.ly/Pinterest Bravo Instagram: http://bravo.ly/Instagram Bravo Tumblr: http://bravo.ly/Tumblr Bravo Media is the premiere lifestyle and entertainment brand that drives the cultural conversation around its high-quality, interactive original content that focuses on the network’s passion points of food, fashion, beauty, design, digital and pop culture. The network’s diversified slate includes Bravo’s first scripted series “Girlfriends’ Guide to Divorce,” scripted comedy “Odd Mom Out,” and unscripted favorites such as Emmy award-winning “Top Chef,” “Vanderpump Rules,” “Below Deck,” “Southern Charm” and the popular “Million Dollar Listing” and “The Real Housewives” franchises as well as the only live late-night talk show, “Watch What Happens Live.” RHONY: Where Did It Go Wrong With Tom? (Season 10) | Bravo https://www.youtube.com/bravo2018-03-30T20:00:00.000Z

When the news first broke that D’Agostino cheated on De Lesseps while they were engaged, it was said that a Playboy model was making out with him at a hotel in Manhattan that the Housewives frequent. On Access Hollywood Live, De Lesseps stated that the woman was an old girlfriend and it was not an affair. She said that she and D’Agostino had gotten into a fight and he went out that night. She said that he made a poor decision and she chose to forgive him, moving forward with the wedding.

De Lesseps says that, looking back, she wishes she had taken into consideration the information she was given about the cheating scandal before calling D’Agostino on the phone in front of Bravo network cameras and exploding. She also says she wished co-star Bethenny Frankel would have pulled her aside to tell her about the cheating and show her the photos of D’Agostino kissing another woman, away from the cameras. The confrontation happened on RHONY. De Lesseps has said she didn’t know if Frankel had the best intentions. Watching the footage on the show, Frankel appears torn and upset about having to deliver this news. Frankel even attempted to contact D’Agostino before presenting De Lesseps with the unfortunate info.

According to De Lesseps, D’Agostino’s womanizing ways carried on in their marriage and put the nail in the coffin when it came to deciding to call it quits. When speaking with People, De Lesseps recalled, “Tom went out and he called up an old girlfriend and they met up with a group of people. And I didn’t know about it — I found out about it the next day in the press. That for me was like, the final straw. I was like, ‘I can’t do this anymore.’” She then added, “I had that moment of ‘Oh my god,’ I had these blinders and all of a sudden they came off. I thought, ‘This is not good.’”

3. According to De Lesseps Her Drinking Issues Stemmed from Her Marital Troubles

As reported by People, on Christmas Eve 2017, De Lesseps was arrested when she was found drunk and trespassing in the wrong hotel room, with another gentleman. De Lesseps was charged with “disorderly intoxication, battery on an officer/firefighter/EMT, resisting arrest with violence and threatening a public servant.” This season on Real Housewives of New York, De Lesseps will discuss the incident, along with the after effects.

When De Lesseps released an official statement on what happened the night of the incident, she said that, “This was my first time in Palm Beach since my wedding, and being here brought up long-buried emotions. I want to offer my sincere apologies to anyone I might have offended with my behavior. I am committed to a transformative and hopeful 2018.”

After hearing about De Lesseps’ run-in with the law, a source told People that D’Agostino “felt really sad for Luann and her family that they had to go through this over the holidays.” De Lesseps confirmed to Celebrity Insider that D’Agostino did reach out to her after her arrest to make sure she was “okay”.

One of the big stories surrounding D’Agostino on RHONY was that he had previously dated and/or had sex with two of De Lesseps’ co-stars over the years. Sonja Morgan and Ramona Singer both confirmed they had either dated or slept with D’Agostino. Since D’Agostino’s split with De Lesseps, they each have seen D’Agostino out and about town. Morgan told Bravo, “You know, I live on the Upper East Side, which Luann has definitely been avoiding, and you do see Tom ’cause he lives on the Upper East Side. And don’t forget Tom was one of my closest friends. We were friends for over 10 years. We used to hang out and party and have a good time. So I’m not doing that with Tom anymore now that there’s a rift between between him and Lu. A rift? A divorce.”

As for Singer, she told Bravo that, “Yes, in Palm Beach when I was there over Christmas after the incident happened with Luann. I was there for New Year’s. I ran into him a number of times ’cause Palm Beach is very small.” Singer didn’t say whether or not she hung out with D’Agostino when she saw him.

D’Agostino definitely still enjoys the high life in New York City. There is no exact figure reported on D’Agostino’s net worth, but De Lesseps previously called him a “millionaire businessman” and if he’s hanging out with some of the Housewives of the Upper East side, then he probably has some money in his bank account Bravo previously reported that D’Agostino has multiple homes, located in New York City to Florida. For work, he has been a part of companies including Workflow and Hano Document Printers. He also founded Smart Source LLC in 2003, where he is the President and CEO.

5. Just Before the Divorce Tom D’Agostino Was Rumored to Be Engaged

After the break up and before D’Agostino and De Lesseps divorced, D’Agostino spoke with E! News about the split, saying, “I fell in love, got married quickly and am very sad that two people in love are not together. The publicized reasons for the divorce make for a great Reality TV story line. I wish Luann much happiness and love.”

A few weeks later, D’Agostino was photographed with a woman named Anna Rothschild in London, and The Daily Mail reported rumors the two were engaged. When questioned by Page Six, Rothschild maintained that, “We’re best friends for 15 years. I adore Tom. I would love to marry Tom because he’s such a great guy, but it’s bad timing for both of us.”

The official statement released by De Lesseps when she announced her split from D’Agostino, on August 3, 2017, read, “It’s with great sadness that Tom & I agreed to divorce. We care for each other very much, hope you respect our privacy during this sad time!” 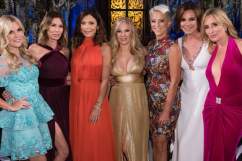