Is there an after credits scene in the new Han Solo movie, Solo: A Star Wars Story? That’s what a lot of fans are wondering as the film, which shows the early years of legendary character Han Solo, hits theaters. Warning: Spoilers are ahead.

The answer is no. There is not a traditional end credits scene. However, the ending of the movie does have an interesting and surprising twist in the form of a cameo few saw coming. Stop reading if you don’t want the movie spoiled.

First, what happens when the credits start rolling? You can leave the movie theater before the credits start rolling if you want because there is no after credits or end credits scene in the new Han Solo movie. Express points out that you might want to stay around to listen, though. “The score, composed by John Powell, goes beyond the baseline set by John Williams with a collection of new themes that play during the credits,” the site reports.

There is also a dedication to veteran Hollywood producer Allison Shearmur, who worked on Solo and other major films (such as the Hunger Games). She died at age 54 in January 2018 of lung cancer.

The lack of an end credits scene in Solo is a disappointment to some fans because such scenes have appeared in other movies with more frequency. The concept of an end credits surprise at the end of movies was mostly popularized by the Marvel franchise. The Star Wars franchise has not embraced the trend, and Solo is not any different.

However, the ending of the movie still does has an interesting surprise. Remember Darth Maul, who died in Star Wars: Episode I The Phantom Menace?

Solo: A Star Wars Story reveals that he runs a crime syndicate called Crimson Dawn and is alive. Darth Maul was the villain in the Phantom Menace, and the timeline doesn’t make sense for him to be alive because he was killed (sliced in half) by Obi-Wan Kenobi in that movie, which was supposed to have occurred years before the Han Solo movie’s time period. That timeline has confused a lot of viewers. The new Solo movie is supposed to be occurring about 10 years before the time frame in Star Wars: Episode IV — A New Hope.

Look closely, though, and you will see that Darth Maul has robotic legs in Solo. His survival is not a surprise to fans who have watched the animated series based on the franchise. Darth Maul appeared in the animated series The Clone Wars and Rebels, which also took place after the Obi-Wan Kenobi fight scene. Clone Wars revealed that Darth Maul lived through his supposedly fatal encounter with Obi-Wan. Darth Maul appears in hologram form in the new Han Solo movie. So, how did Darth Maul survive? “A diet of rats, some robotic spider legs,” according to Vanity Fair. In other words, people who’ve watched the animated shows won’t be as surprised by Darth Maul’s survival, although he’s dropped the “Darth” in Solo.

Indeed, if you look closely during Maul’s appearance in Solo, you will notice that he has robotic legs. Ray Park plays Darth Maul.

CNet explains of the timeline: “The Clones Wars series takes place between Episode 2: Attack of the Clones and Episode 3: Revenge of the Sith. Solo: A Star Wars Story takes place some time after Episode 3, but before Episode 4: A New Hope.”

It’s also very possible that the new Solo movie is setting up a sequel (to the prequel as it were) because it starts back in time enough to have room for more spin offs, especially one that will explain more about Darth Maul’s survival. So, although there is not an end credits scene, there is a tease. Maul was last seen on the big screen in a Star Wars movie in 1999, but he has a different voice in Han Solo. He is now voiced by Sam Witwer, “who played the character in The Clone Wars, Rebels and several video games,” Independent reports.

Let’s talk #SoloStarWars I have issues with only a couple of parts, mainly THAT character appearing at the end, but overall I smiled a lot. Ear to ear during the Kessel Run. Alden Ehrenreich was great. He had the stance, body language, and swagger of Han.

As for the end credits, Marvel has embraced the concept of an end credits scene to such a degree that Marvel’s Guardians of the Galaxy, Vol. 2 had five end credit scenes, although they were mostly fast scenes that were jokes.

The new Tomb Raider movie did have an end credits surprise in the form of an extra scene right before the credits start rolling. Star Wars: The Last Jedi, which featured Carrie Fisher’s swan song, did have something worth waiting for at the end of the movie, although it wasn’t exactly an after credits scene. It was a single sentence tribute to Princess Leia. The Leia/Carrie Fisher tribute reads simply:

In loving memory of our princess, Carrie Fisher

That was a special moment and occasion, though. There was no post-credit sequence for Batman v Superman: Dawn of Justice. You also did not get an end credits scene in the Wonderwoman blockbuster. Thus, the trend hasn’t spread to all big Hollywood productions. At least not yet.

What is Han Solo about? Alden Ehrenreich stars as the title character made famous by Harrison Ford. “You look good. A little rough around the edges but good,” Ehrenreich is told in the movie. The movie provides some of the back story for Ford’s character leading up to the famous Star Wars films we are all familiar with, and it shows us what Han Solo’s life was like before the Rebellion. The film explains how Solo met such iconic characters as Chewbacca and Lando Calrissian.

Paul Bettany plays Dryden Vos, described as gangster who is part of the crime syndicate in the movie called Crimson Dawn. That is the syndicate that is run by, surprise, Darth Maul. 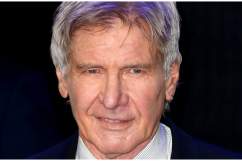 Is Harrison Ford in the New Han Solo Movie?