One of the big mysteries on the new Season 5 of Arrested Development is who killed Lucille Austero (aka Lucille 2.) We have a list of all the usual suspects from last season, along with new information that emerges in Season 5. This post has spoilers for Season 4 and Season 5, along with one major spoiler from Episode 7 of Season 5. The article will have spoilers throughout regarding revelations about suspects, but we will warn you before sharing the big spoiler from Episode 7, in case you don’t want to see that part.

Season 4 had a lot of drama centered around Lucille Austero (aka Lucille 2), and the season ended with what appeared to be her bloody body at the bottom of the stair car. However, it was always unclear if she really died.

Season 5 picks up the mystery right where we left off.

The last time we saw Lucille 2 was on Cinco de Cuatro, and no one has seen her since. In Episode 1 of Season 5, it appeared that Michael might have gotten a phone call from her, but some fans find that a bit suspicious. We also keep seeing flashes of what appears to be a bloody Lucille on the stair car, but it’s still unclear just what happened to her.

Here are some of the main suspects in her disappearance (or death.)

Buster on #ArrestedDevelopment is too funny. Love him so much. pic.twitter.com/3dzqKtzlgT

Buster: Buster was pretty aggressive the night of Cinco de Cuatro, and he’s still the prime suspect in Lucille 2’s death. He knocked Herbert Love into a coma and he was drunk that night. We also learn that Buster was furious when he found out that Lucille 2 kept him from Mother, and he blamed her for his mother being in jail. He seems shocked when he sees the blood on the stair car, but forgetfulness is a common problem on this show.

Lindsay: Honestly, Lucille 2, you’ve been like a mother to me — except kind and loving and willing to let me eat.#ArrestedDevelopment

Lindsay: Their relationship took a dramatic downturn when Lucille 2 shared photos that showed Lindsay and Herbert Love in compromising situations. She also ended up choosing Sally Sitwell as her campaign manager over Lindsay. Now Lindsay is running against Lucille 2 and not conflicted about that at all.

Michael: Michael had borrowed $700,000 from Lucille 2. He tried to seduce her to get an extension on the loan, but she turned him down. When he got back to the model home, he was very ashamed about something (“I lost control and I wish I could forget,” he said.) But Gob made him take a Forget-Me-Now, so that memory is now gone. Lucille 2’s brother had also threatened Michael, which might add to the suspicion.

Tobias: Tobias and Argyle borrowed $700,000 to fund Fantastic 4: An Action Musical. But when Lucille 2 found DeBrie, she threatened to send Tobias back to prison.

What if Sally Sitwell killed Lucille 2 to take her position in the race? Or Lucille 2 faked her own death to get away from all the stuff happening that night with the Bluths? #ArrestedDevelopment

Sally Sitwell: She seemed to have something to gain, since Lucille 2’s death gave her a chance to run in her place. But we later learn that she left town when she found Love passed out, so she’s not taking advantage of that opportunity. However, she did steal $100,000 from Lucille 2’s campaign, so maybe she left town so she wouldn’t get caught.

Maeby: Lucille 2 saw her adopted son Perfecto in bed with Maeby, after Maeby borrowed a lot of money from Lucille for Fakeblock.

Oh god. Oh my god. Oh Christ. They actually had Lucille comment on the fact that Trump stole her "build the wall" idea!! #ArrestedDevelopment pic.twitter.com/1Y7l67xlOF

Lucille Bluth: She blamed Lucille 2 for her being in jail and she wanted to pay Lucille 2 back. In addition, George Sr. and Lucille Bluth are building a wall, but Lucille 2 owns the company and she’s campaigning against the wall. So she could throw quite the wrench in their plans.

Gob: Gob owed money to the Mongol horde. But he seems the least likely suspect, since he’s pretty much all obsessed with Tony Wonder. There’s really no room for Lucille 2 hate in his heart right now.

This is the funniest #ArrestedDevelopment joke, and it took nearly four seasons to build. pic.twitter.com/3Jo6d3itv8

George Michael: Nope. Not even close to a suspect. He doesn’t have any idea who Lucille Austero is (unless that’s a result of a Forget Me Now.)

Lucille 2: She has a chronic vertigo issue, so she might have just fallen down the stairs and caused her own demise.

We learn a very interesting detail about Lucille 2’s disappearance in Episode 7 of Season 5.

It looks like Lucille 2 might still be alive. A photo shows the stair car with two people inside: one bald head and “one spikey head.” This leads Lucille and others to believe that Oscar ran away with Lucille 2. She took him up on his offer to run away together, abandoning her campaign.

Of course, there’s always a chance that this is a misdirection. Maybe Oscar took the stair car and a mannequin that looks like Lucille Austero because he killed her. But the leading theory as of Episode 7 is that Lucille’s alive and she and Oscar ran away together. 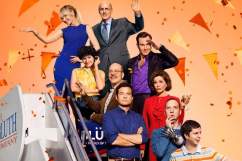 How Many Episodes Are in ‘Arrested Development’ Season 5?