Jurassic World: Fallen Kingdom has debuted in theaters, and that has a lot of people wondering: Is it worth staying after the credits start rolling? Is there any end credits scene?

The answer is yes. There’s a brief after credits scene in Jurassic World: Fallen Kingdom, the sequel to 2015’s Jurassic World. It’s worth staying for, although you will have to sit through a lot of credits to see it (a lot of people worked on this movie). However, the scene is worth sticking around for because it gives a glimpse of the sequel that the movie obviously set up. Stop reading now if you don’t want to get spoilers of how Jurassic World: Fallen Kingdom ends.

It’s expected that Jurassic World: Fallen Kingdom is the second part of a trilogy, which the third installment scheduled for 2021.

Jurassic World: Fallen Kingdom is sort of a transition movie between two worlds; there’s the dinosaur theme park now turned into shambles, representing the natural world with all its perils and glory, and it’s a world in which dinosaurs have taken over without human involvement. However, they’re at nature’s peril, and a major volcano is set to wipe them out and create a new extinction.

Enter a do-gooder, Claire (Bryce Dallas Howard), seeking to save the dinos a second time and her former boyfriend and now reclusive raptor whisperer, Owen (Chris Pratt), who are sent back to Isla Nublar in what they think is an effort to save the creatures after Congress refuses to act, deciding to let nature – and God – correct what humans previously undid.

As can be expected, things go awry when it turns out the two are being used by mercenary big trophy hunters who are actually rounding up some of the dinosaur species to sell them for millions at a reptilian auction. The movie wrestles with big questions along with the special effects; namely, should human beings tinker with genetics? What responsibility do they have when they do? What happens when the law of unintended consequences kicks in? Should they save the dinosaurs if it means imperiling the human race? The questions are also raised by the presence of a girl (Isabella Sermon) who turns out not to be the daughter of her mother but actually her mother. She’s Maisie Lockwood, and her “grandfather” helped found Jurassic Park but is now in fast failing health. It turns out he cloned her from the remains of his deceased daughter.

In the end, the movie sets itself up perfectly for a sequel, as does the end credits scene.

The end credits scene, and the end of the movie, help set up the premise for the obvious sequel. The dinosaurs, having been transported to the massive secluded California Lockwood mansion where the auction took place, are set loose by the young cloned girl. Freed into the world of humans, dinos of all species run off into the night, with one dramatic scene showing a T-Rex facing off with a lion at what looks like a zoo. The movie ends with the empathetic to humans and Chris Pratt friend raptor, Blue, looking over a sleepy residential town.

You can see a still of the end credits scene here.

The obvious premise: Next time, the humans will have to figure out how to deal with the dinosaurs in their own habitat. Claire, Owen, and Maisie, will have to deal with the integral conflict that they released something that will likely cause harm in order to avoid harming it. The end credits scene continues this tease. It’s a quick scene literally at the end of the credits that shows a pair of Pteranodon flying over Las Vegas, before landing on the replica Eiffel Tower in that city. Sirens blare, pedestrians look shocked, and the birds screech. And that’s it. But it’s a heckuva tease for what’s going to come next.

Since it all started in a theme park, it’s fitting that the dinos headed for Vegas, and the third movie may pick up there. 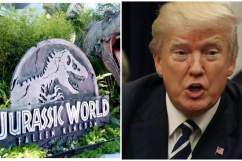