One of the most popular Youtubers on the planet made her glorious return to Twitter on June 25. Loren Gray announced on Instagram, “I’m back on Twitter finally. Username – Loorengray. Refollowing u angels all days (,”).” In a later tweet, Gray said, “I’m so happy. I missed u so much. Were back and better. Thank u for being patient with me. I love you forever.” Within two hours of being back on Twitter, Gray amassed over 25,000 followers.

Gray was last in the news during the 2018 Radio Disney Music Awards when she and Hannah Stocking wore the same dress to the red carpet on June 22 at the Dolby Theater in Los Angeles. Gray made no mention of a possible return to Twitter in her June 24 post on Instagram showing her at the Toyota/Save Mart 350 in Sonoma.

Gray’s full name is Loren Gray Beech, according to a video she published in April 2016, titled “Stripped Down.” Gray said, “A lot of people think that my last name is Gray. My middle name is Gray, and my last name is Beech. Fun fact – I used to hate that my middle name was Gray, and now I actually go by it because I prefer it more than Beech. I got made fun of for it in preschool, so whatever.” On March 19, Gray made international news when she was signed to a record deal by Virgin Records. TMZ reports that Gray is being paid a $550,000 advance for her first album, followed by up to $4.8 for follow-up released. That sum does not take into account possible royalty payments if Gray produces a few hits for Virgin. 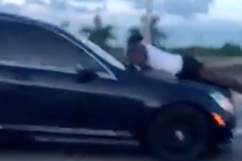