Scary Spice has announced she is going to rehab to deal with emotional pain. Singer Mel B, whose full name is Melanie Brown, shared with fans that she was recently diagnosed with post-traumatic stress disorder. She told British newspaper the Sun that six months spent writing an autobiography forced her to relive the trauma of the “emotionally abusive relationship” with ex-husband Stephen Belafonte. Mel B will enter rehab in September.

1. Mel B and Stephan Belafonte Separated After a Decade of Marriage Amid Accusations of Domestic Violence, Infidelity and Forced Threesomes

GettyStephen Belafonte and Mel B attend the premiere of Warner Brothers “Barbershop: The Next Cut” in Hollywood, California, on April 6, 2016.

Melanie Brown, 43, and film producer Stephen Belafonte got married in Las Vegas in 2007. They split in 2016 and their divorce was finalized in December of 2017. They have one daughter, 6-year-old Madison.

The divorce was a nasty one full of ugly accusations. Brown accused Belafonte of having an affair with their nanny, a German exchange student named Lorraine Gilles. She claimed her husband got the young woman pregnant and then used Brown’s money to pay for an abortion. Gilles denied the affair.

2. In June 2018, Mel B Was Granted a Temporary Restraining Order Against Her Ex-Husband

A judge granted Melanie Brown a temporary restraining order against Stephen Belafonte in June of 2018 following a dramatic blow-up at their previous home. Brown also asked the judge to ban Belafonte from coming within 100 yards of her three daughters, but that request was denied.

According to court documents obtained by the Blast, Mel B went to the home she and Belafonte had shared on May 25th in order to pick up some personal items. She said that when Belafonte also arrived, she panicked and called police. Mel B described her ex-husband’s behavior as aggressive and hostile. Police actually handcuffed Belafonte during this encounter.

On June 12, the couple was scheduled to again meet to divide the rest of their belongings. But that meeting never took place because Mel B had a panic attack and was hospitalized. In her request for a restraining order, she said the thought of seeing Belafonte had terrified her and prompted the panic attack. “I began to have flashbacks of incidents where Stephen would terrorize me in front of the children. The thought of returning to the Cordell property to face my abuser again, brought to the surface every name hurled at me, every tear I shed at the hands of Stephen, every physical beating that I suffered from him.”

3. The Singer’s Autobiography ‘Brutally Honest’ Is Said to Detail Her Marriage to Belafonte

I’m so excited to finally be able to show you the cover for my new book “Brutally Honest” it’s out in in November,yipppeeee!! Have you pre-ordered it yet?

Melanie Brown’s autobiography Brutally Honest is scheduled to be released in November of this year. The book is described as an “exposé of the struggles and acute pain that lay behind the glamour and success.” Brown says the book will give fans a look behind the scenes of the Spice Girls, as well as detail the struggles she faced in her previous marriage. Not included in the book is anything about comedian Eddie Murphy, who is the father of her second daughter, Angel. Brown signed a gag order in 2007 that prevents her from writing about Murphy.

In an interview with the Sun, Brown admitted that writing the book brought a lot of trauma to the surface. She says the pain of her previous marriage to Belafonte pushed her to drink heavily. Brown told the newspaper, “I’ve been working with a writer on my book, Brutally Honest, and it has been unbelievably traumatic reliving an emotionally abusive relationship and confronting so many massive issues in my life.”

She addressed her issues with alcohol. “I am being very honest about drinking to numb my pain but that is just a way a lot of people mask what is really going on… Sometimes it is too hard to cope with all the emotions I feel. But the problem has never been about sex or alcohol — it is underneath all that.

A source also told the newspaper that Brown allegedly used sex to try to cope with her emotions following the divorce from Belafonte. Rusty Updegraff, who the Sun identifies as a close friend of Brown’s, says Brown had sex with three men in one day after the divorce.

4. Mel B Says She Wants to Be Honest About Her Pain and Raise Awareness About PTSD

I have no words

In the Sun interview, Melanie Brown shared that it is important for her to raise awareness about mental illness and try to help others like her. “I am still struggling but if I can shine a light on the issue of pain, PTSD and the things men and women do to mask it, I will do. I am speaking about this because this is a huge issue for so many people.”

On Sunday, August 26, Mel B shared a video on Instagram alongside daughter Madison. The little girl says a quick prayer before they begin eating. But it was the book on the table that caught the attention of fans: Heal Your PTSD by Michele Rosenthal.

Mel B also shared a link on Twitter about her PTSD diagnosis. She wrote “Knowledge is power” and posted a link to a U.S. government website explaining post-traumatic stress disorder. The site describes the disorder as something that “happen to anyone” and that “It is not a sign of weakness.”

5. Mel B’s Mother Andrea Praised Her Daughter on Social Media for Her Decision to ‘Face her Demons’

Andrea Brown shared a message on Twitter commending Melanie for deciding to enter rehab. The message reads, “I am so proud of my daughter. She has the courage to face her demons head on and deal with them. I know what hell she has been through and I know what trauma she suffered and still suffers. Do not judge because so many people have PTSD and try and numb the pain any way they can. I am proud of her honesty.”

Mel B and her mother were estranged for nearly the entirety of her marriage to Stephen Belafonte. Andrea shared back in 2011 that Mel B had not told her she was pregnant with Madison. She said she only learned about the pregnancy and Madison’s birth because of tweets about it.

Sat beside this wishing well and preying for my broken family to b healed how can one family go through so much shit pic.twitter.com/d5IBajdXMR

Andrea also claimed over the years that Belafonte was abusing her daughter, and blamed him for the rift in their relationship. Melanie’s younger sister Danielle also stated on social media that she and their mother had not seen Melanie for eight years prior to their 2017 reunion. 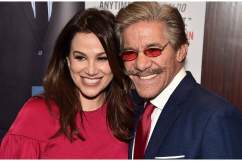 Read More
5 Fast Facts, Breaking News, Celebrities
Mel B is planning to enter rehab for alcohol addiction after being diagnosed with PTSD.