Its lineup includes nostalgic 90’s classics, such as AAAHH!!! Real Monsters, Rocko’s Modern Life, Are You Afraid of the Dark? and The Wild Thornberrys, among many others. More series are expected to join the service at a later date.

Your childhood is now streaming! Check out @NickSplat now on VRV! pic.twitter.com/eLesX6VuhA

According to Polygon, there will be some favorites missing, such as Hey Arnold, Rugrats and Invader Zim, most likely due to the three shows returning to Nickelodeon, whether as a full series reboot or a made-for-TV movie.

Excited 90’s kids (now adults) can subscribe to NickSplat for $5.99 a month, according to a press release. The premium bundle, which is available for $9.99 per month, would include services like Crunchyroll, Funimation, Rooster Teeth, Shudder, Nerdist, Mondo, and Cartoon Hangover, among several more. The premium package also includes access to exclusive series like HarmonQuest, Killjoys, Thundercats, and Gary and His Demons, according to Tech Crunch.

Your favorite @NickSplat shows are now on VRV! What are you watching? pic.twitter.com/Z38mGBUwxJ

“VRV, with a sophisticated user base that loves the best in animation, is the perfect platform to launch our NickSplat channel,” said Sam Cooper, Viacom Executive Vice President of Distribution and Business Development Partnerships, in a statement about the launch.

“Viacom’s content – including our deep library of genre-defining television – is highly in demand, and our audiences are always looking for new and innovative ways to enjoy our programming. We’re committed to finding the best partners to bring our individual brands direct to the consumer, and this relationship with VRV is an exciting step forward in our strategy,” Cooper added.

According to Tech Crunch, VRV isn’t targeting a mainstream user base, and is more focused on serving various fandom favorites – anime fans, gamers, comics fans, sci-fi and fantasy fans, and others.

They added Nick Splat to VRV as a channel and I literally just squealed in surprise out loud and CANNOT CONTAIN MY HAPPINESS!

VRV now has @Crunchyroll. It has @FUNimation . It has @shudder . It has @RoosterTeeth . It has friggin @NickSplat . AND MOAR! pic.twitter.com/r26QITXHBc

The full list of shows is as follows, according to Polygon:

Some classic Nickelodeon shows can be found on Hulu or Amazon Prime, with the latter allowing the user to purchase per episode or for the full season or series, so if you are nostalgic for just one or two older series, it may be worth it to check it out elsewhere before ordering NickSplat. However, for those of us who crave all of our old favorites, NickSplat is a great place to binge watch all of the cartoons we grew up watching.

VRV is available online and as an app on Xbox One, PS4, Apple TV, Roku, Fire TV, Android TV, Chromecast, Android and iOS. 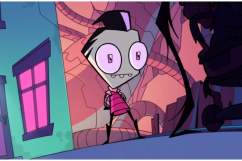