Erin Andrews is geared up to co-host a new season of Dancing With the Stars. While all eyes will be on the dancers in the coming weeks, the sports broadcaster will also undoubtedly draw some attention.

Many DWTS fans find themselves curious about the sports broadcaster’s private life. Andrews married former NHLer Jarret Stoll in a sunset ceremony in Montana on Saturday, June 24, 2017. The couple exchanged vows in front of a small group of family and close friends. 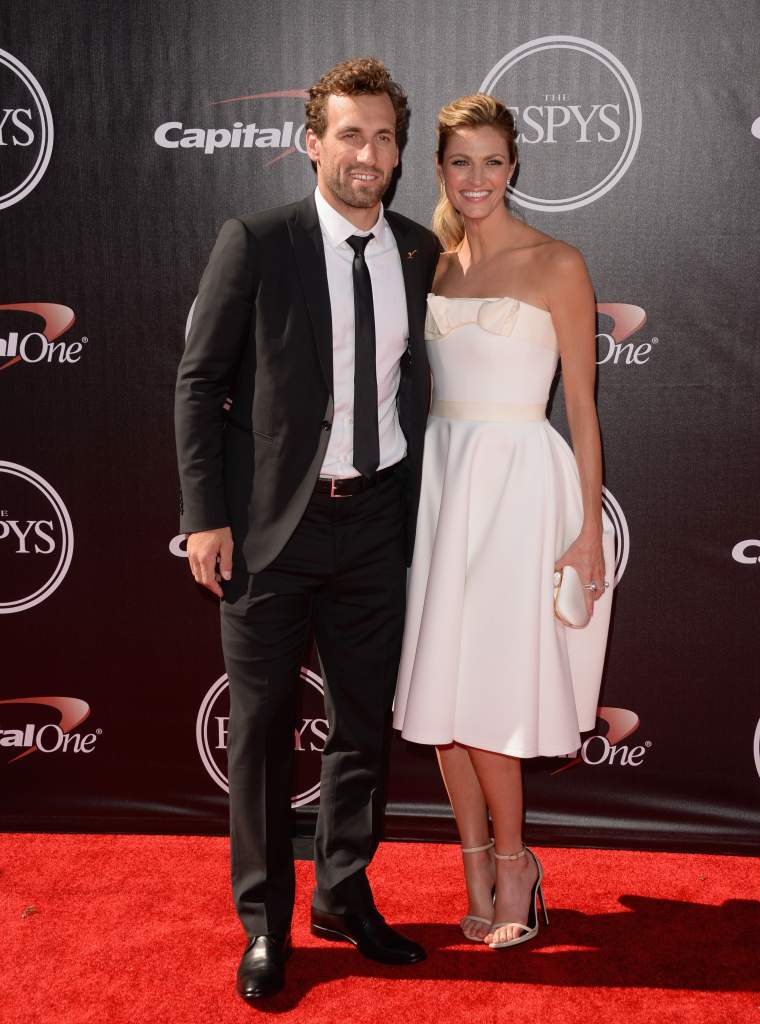 Andrews and Stoll worked with celebrity wedding planner Yifat Oren to make all of their wedding hopes and dreams come true. They exchanged vows at sunset at a secluded location in Montana. The wedding was described as “intimate” by People Magazine.

Before their big day, Andrews talked about her hectic schedule and how it wasn’t always easy to think about wedding planning.

“You know my man is the bridezilla! He is Pinteresting. I’m in Dallas Cowboy meetings, and he’s sending me, ‘Hey babe, I saw this on Pinterest,’ and I’m like, ‘Hey babe, will you let me get through Super Bowl?'” Andrews told Extra back in January.

Days before her wedding, Andrews posted the following photo of the sunset in Montana. This is believed to have been the backdrop to her perfect day.

2. Stoll Proposed to Andrews at Disneyland in December 2016

Soon after, Andrews was spotted at Los Angeles International Airport (LAX) with a diamond bauble on that finger, pretty much confirming that she and Stoll had taken the next step in their relationship. There had been a lot of chatter on social media, to which Andrews responded with hearts and kissy-face emojis, but didn’t confirm nor deny the rumors directly.

It wasn’t until her former Dancing With the Stars partner, Maks Chmerkovskiy, spilled the beans in an interview with Fox 5 TV Las Vegas that the world got confirmation. Since Andrews spoiled the news that Chmerkovskiy and his fiancee, Peta Murgatroyd, were expecting their first child by mistake during a live airing of Dancing With the Stars, many feel as though this was Maks’ attempt at friendly payback.

“I had an amazing time with Erin Andrews, who I think maybe just got engaged and maybe I’m breaking the news, I’m not sure. She also kinda, maybe broke the news of us being pregnant, so maybe that’s returning the favor over here,” Chmerkovskiy said.

A short time later, Andrews officially showed off her new bling in an Instagram photo (above). According to People Magazine, Andrews’ engagement ring looks like “a large cushion-cut stone on a slender band.”

“We went there for Christmas to see the Christmas decorations, and we had a lovely dinner there, and he did it right there at dinner at Disneyland. I was bawling like a child,” Andrews told Good Morning America about a month later.

Stoll and Andrews met in 2012 thanks to a mutual pal — Michael Strahan.

“He’s friends with both of us. And I knew Strahan wouldn’t set me up with someone I wouldn’t be interested in. He was good-looking, but at first, I said, ‘I don’t know …’ But Strahan said, ‘Just go to dinner. Trust me,'” Andrews told Your Tango back in 2014.

At the time, Stoll was playing for the Los Angeles Kings. The couple went out on their first date just before Valentine’s Day.

“We actually went for a nice dinner. We spent that day out in Malibu, it was like the day before [Valentine’s Day]…had a great day out there and then had a nice dinner out here by the beach. Just really mellow, low-key. [The Kings] played the next night, too, so I had a personal curfew set up. It wasn’t a late one, but it was good. It was relaxing and a great spot down here by the beach,” Stoll told E! News in 2013. “There’s obviously some sports she knows a little bit more about than me, it bothers me a little bit, but I’ll take it. Yeah, it’s fine. Right now it’s great. It’s her off-time right now—her down time—before baseball starts up again,” he added.

4. Andrews Wants to Have a Baby

Happy Birthday to Howard's Dad @stolly28! We love you ?❤️?! Thank u @brozaphoto

Stoll and Andrews do not have any children of their own, but Andrews has expressed a strong desire to have children. Andrews was diagnosed with cervical cancer in 2016, but since she has beaten cancer — and didn’t need to undergo a hysterectomy — she says that she wants to become a mom.

“I definitely want it. Even though I’m crazy on the sidelines and doing other things with ‘Dancing with the Stars,’ absolutely. I didn’t have to have a hysterectomy and so … I’m fully capable of having a baby, but that’s because I went and got tested and because we were able to treat it early, and that’s all you need to tell the women in your life,” Andrews told Michael Strahan on Good Morning America back in March.

Andrews and Stoll were overjoyed to become “parents,” a month before they got married when they got a Golden Retriever. They named their new baby “Howard” and have shared several photos of him on social media. You can see some pictures of Howard below.

In February 2017, E! News caught up with Stoll and Andrews at the LIFEWTR: Art After Dark pre-Super Bowl LI party at Club Nomadic in Houston, Texas. The couple was asked what they wanted to accomplish in 2017 and Andrews was quick to mention that they were getting a dog.

“We want to get our Golden Retriever! We’re supposed to get him in May. We’ll get our dog before the wedding,” Andrews said.

“We’ve had a name for, like, a year now and we’re finally going to get him [in May],” Stoll added.

Back in 2015, Stoll found himself in quite a big of trouble. He was arrested in Las Vegas after police say he had an 8-ball of cocaine and 8 grams of Molly on his person. According to TMZ, Stoll was on his way to the Wet Republic pool party at the MGM Grand when he went through a security area when the drugs were found.

“According to the police report, when asked if the powder inside the baggie was coke, Stoll said, ‘Yes.’ Cops say Stoll had 3.3 grams of coke … and 8.1 grams of Molly,” TMZ reported at the time.

Stoll was taken to jail and booked for drug possession. He was later released on $5,000 bond.

According to ESPN, the charges against Stoll were “lessened from felony cocaine possession to two misdemeanors” after he agreed to a plea deal. He was sentenced to 32 hours of community service.

Two misdemeanors for Stoll: 1) provoking commission of breach of peace and 2) trespass. 120 days to complete 32 hrs of community service

“Now that the case has been resolved I am committed to meeting all of my obligations to the Court and am grateful for the chance to offer guidance and share positive life lessons to kids as part of the resolution of this matter. My focus remains on hockey and I am looking forward to getting back on the ice next season,” Stoll said in a statement at the time.