Quad Webb-Lunceford and her husband, Dr. Gregory, are cast members on Married to Medicine, but before we get into their marital drama, beware of season 6 spoilers from the show. THIS IS YOUR MAJOR SPOILER WARNING. If you do NOT want to know any information on the show, STOP READING NOW.

To bring you up to speed on where season 6 begins and what has happened since season 5 ended, NBC has reported that, “Since last season Quad has moved … into the guest bedroom, and things are progressively tense between her and Dr. G. Quad is also laser focused on her career as a successful talk show host, and feels like there is a wedge between the friendships she once knew with the ladies.” Quad has threatened divorce in the past, but it looks like she has followed through with her decision.

In May 2018, The Grio reported that Quad had filed for divorce and accused her husband of infidelity, while they officially separated in April 2018. According to Newsweek, episode 1 of the new season for Married to Medicine puts their relationship on blast as Quad is faced with cheating rumors. An unidentified woman reportedly claims that she had a sexual encounter with Quad’s husband, in an interview on a gossip site called AllAboutTheTea. The woman says that she met Dr. G at a club and performed oral sex on him, as well as other sexual acts.

According to OK! Magazine, the divorce between the two reality stars has really heated up, as Quad and her ex went back to court in early August 2018.

Previously, in an interview with The Grio, prior to filing for divorce, Quad voiced that she and her then-husband had failed at couples’ counseling. Quad revealed that, “We’ve done marital counseling and the minute that the counselor wanted to address some things with him he continued to deflect to me so she became very frustrated. Essentially, we got kicked out of counseling. She couldn’t see him. She got that frustrated. My husband is passive aggressive. It was very challenging for him to take a look in the mirror and see what she was saying.”

In addition, on the season 5 reunion of Married to Medicine, Dr. G said that he had gotten a hotel room with two other women, but claimed he did not do anything with them. He also said that one of the women tried to extort him and his wife for money, according to Bravo. The alleged woman is named Jackie Presley and she told AllAboutTheTea that Dr. G had told her that he was single.

Presley stated that, “I did not try to extort him [Dr. Gregory Lunceford]. He told me he likes to spoil women, so I simply asked him for $1,500 — not as extortion, but as a gift. I don’t threaten people by demanding money. I’ve messed around with Future [famous rap star], Geno Smith and more and never extorted for no money. That’s not me.” Well, whether the cheating allegations are true or not, whether Dr. G has a mistress or not, it doesn’t matter because he and Quad are no longer still together. 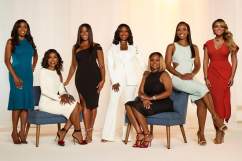 How to Watch ‘Married to Medicine’ Season 6 Episodes Online