Ghost Adventures returns with another new round of episodes. Season 17 of the show premieres on November 2, 2018, on the Travel Channel. For those without a cable subscription, you may be looking for different ways to watch the show and you have come to the right place for answers. If you don’t have cable or can’t get to a TV, you can watch a live stream of the Travel Channel on your computer, phone or streaming device via one of the following cable-free, live-TV streaming services:

In addition to a Netflix-like on-demand streaming library, Hulu also offers a bundle of 50-plus live TV channels, including Travel Channel. You can sign up for “Hulu with Live TV” right here, and you can then watch a live stream of the show on your computer via the Hulu website, or on your phone, tablet or streaming device via the Hulu app.

Travel Channel is one of 85 channels included in the main Fubo bundle. You can sign up for a free 7-day trial right here, and you can then watch a live stream of the show on your computer via the FuboTV website, or on your phone, tablet or streaming device via the FuboTV app.

Travel Channel is included in Philo’s main 43-channel bundle, which is the cheapest among all streaming services if you plan on keeping it long-term. You can sign up for a free 7-day trial right here, and you can then watch the show live on your computer via the Philo website, or on your phone, tablet or streaming device via the Philo app. 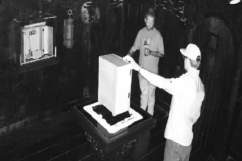 What Is the Dybbuk Box on ‘Ghost Adventures’?

This past week, the live Ghost Adventures Halloween special aired for four hours. This year, the team explored Zak Bagans’ The Haunted Museum, trying to communicate with several supposedly haunted objects, including Peggy the Doll, the Dybbuk Box, and the Demon House basement staircase. Bagans’ museum is in Las Vegas, Nevada.

Episode 1 of the new season is titled “Idaho State Reform School” and the plot description reads, “The team investigates the Idaho State Reform School which has a dark history; during the lockdown, the team members document evidence of unexplained activity and disembodied voices and endure physical attacks.” The second episode 2 is called “Westerfeld House” and the plot synopsis states, “Zak and the crew head to San Francisco to investigate the historic William Westerfeld House, which played host to satanic rituals performed by underground occultist filmmaker Kenneth Anger and Church of Satan founder Anton LaVey.”

Episode 3 is titled “Crisis in Oakdale” and the description of the episode states, “In Oakdale, Calif., the crew investigates a sinister energy darkening the home of a grieving family; during the emotionally charged and frightening lockdown, Billy and Aaron become debilitated while Jay witnesses a door open by itself.”

For those who would like to put on their own paranormal investigations at home, but don’t have the right equipment, Zak Bagans told RedBull.com that a simple digital or tape recorder can do the trick. Bagans explained, “This is the most basic piece of equipment you’ll use, picking up different frequencies which spirits might be speaking in. These recorders can pick up sub-frequencies below what our ears can hear. I’ve caught spirits speaking and when I’ve recorded whispers, it’s actually a spirit screaming. But a lot of times they’ve been full, what we call EVPs, or Electronic Voice Phenomenons.” So, even if you don’t have actual ghost hunting equipment or devices, you can still conduct your own investigations.

In addition to Ghost Adventures, Bagans also has another show on the Travel Channel called Deadly Possessions.