It’s the 2018 Miss Universe Pageant and 94 contestants are hoping to win the coveted crown. Steve Harvey and Ashley Graham have returned as the hosts of the event with Ne-Yo as the musical guest. But, let’s get down to what you’re really interested in … the winners. Check out the top 20 contestants as they are announced live.

The top 20 contestants are picked from four regions, dividing up the world. The first five semi-finalists out of the 20, from Africa and Asia were then announced.

Miss South Africa was the first revealed and she talked about having a little bit of pressure since the current Miss Universe is from South Africa. The second contestant announced was Miss Philippines, who talked about being a singer and a musician. Miss Nepal was the third out of five contestants picked to move on from the Africa and Asia division.

Next up, Miss Vietnam was revealed as moving forward as well and she talked about one of her favorite hobbies, which is actually grocery shopping. Host Steve Harvey told Miss Vietnam that he loved her short haircut.

With one spot remaining, Miss Thailand was revealed as rounding out the five semi-finalists from Africa and Asia. This made the crowd go wild since the pageant is taking place in Bangkok, Thailand tonight.

At this point, there were still 15 more semi-finalists to reveal.

TOP 20 out of 94 – All of these ladies show the global qualities of a #missuniverse #personality #grace #style, #attitude, and #beauty. pic.twitter.com/aQc1NtUcaT

Europe was the next division to introduce their contestants and, again, only five of them would move forward to become semi-finalists. The first contestant from Europe, revealed to be moving forward was Miss Poland, who told Harvey that she couldn’t believe it. Poland has never won Miss Universe in the past.

Next up, the second semi-finalist from Europe was … Miss Belgium, who has a degree in accounting. Harvey asked her if accountants are boring and she said she doesn’t agree because they get to do a lot of shopping as accountants. Miss Great Britain was the next semi-finalist revealed. When Harvey asked Miss Great Britain about her musical talent, she broke out in song, singing “A Moment Like This” and Harvey started dancing.

Miss Hungary was then announced as a semi-finalist and it was revealed that no one from her family was able to attend the pageant, so she gave them a shout out on stage. The last of Europe was revealed to be Miss Ireland … and she is a major Harry Potter fan.

From The Americas, Miss Curacao was the first contestant announced as moving forward. Pageants are in her blood, with both her mom and grandmother competing in pageants over the years. She said she will never give up on her dreams because of those two women.

Next up was semi-finalist Miss Costa Rica. She hosts a TV show in her country and she gave pageant host Steve Harvey some advice, telling him to carefully read any important envelopes given to him on stage. This was a joke about his messing up the winner of Miss Universe in 2015.

Miss Canada was the next contestant to be revealed as moving on in the competition. She is a model, as well as an engineering student. And the next spot went to … Miss Puerto Rico, who gave a shout out to her father in the audience, telling him she loves him.

This left one more spot for a contestant from The Americas division and the final semi-finalist from this group was Miss Jamaica.

At this point, five wildcard spots were still up for grabs. Miss USA was the first contestant chosen to move forward and she said that she was very grateful to be picked. She recently was involved in a scandal where she was accused of bullying and making fun of the non-English-speaking contestants in the competition, so her being chosen to move forward may be a surprise to many.

Next up was Miss Venezuela and her luscious, long locks. She started college at the young age of 15 and she said she had difficulty relating to older classmates. Miss Venezuela struggled with her answer but left the spotlight with a smile on her face. And, the next semi-finalist was revealed to be Miss Indonesia. Miss Brazil was then announced as moving forward and she talked about her experience living with a tribe in the Amazon.

This meant that there was one more spot left in the top 20 and that was given to Miss Australia. Host Steve Harvey then gave Miss Australia the microphone to tell a corny joke. 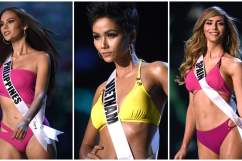