The reality series Total Bellas is back for its fourth season. The series follows twin sisters Nikki and Brie Bella as they navigate the drama of being businesswomen and WWE Superstars. The fourth season will focus on Nikki’s split from John Cena, but it will also focus on Brie’s marriage to Daniel Bryan and their desire to have more children.

Bryan, born Bryan Lloyd Danielson, is a professional wrestler who’s been with the WWE since 2000. He started dating Brie in 2011, and the couple kept a close relationship despite being busy with their respective WWE careers. “It’s been hard, actually,” he told RVA Magazine in 2013. “Brie has to go do certain things for the show, you know what I mean? Before Brie came back, I’d be on the road and come back and we’d have time at home just together just completely by ourselves before I would go back on the road. But we’ll see each other more on the road and we get less quality alone time at home. So it’s an ever evolving situation.”

Get a hubby who’s has a big heart, is an amazing father and a crazy environmentalist ?? Total Bellas tonight 9/8c only on E! #family #reality #itshere #entertainment #totalbellas #life #love #fatherdaughter

The couple were married on April 11, 2014. Bryan continued to wrestle, but a run of serious injuries both inside the ring and out forced him to announce his retirement on February 8, 2016. Later that same year, Brie announced that she would also be retiring because she wanted to stay at home with her husband and start a family.

The couple welcomed their first child together, Birdie Joe Danielson, on May 9, 2017. Both eventually returned to WWE in a limited capacity. Most recently, Bryan, who has been appointed SmackDown general manager, competed in SummerSlam 2018 against The Miz.

The Couple Plan on Having More Children In the Near Future

Bryan has had a decorated wrestling career. He’s held nearly all of the major belts that the brand has to offer, include the WWE Championship, WWE’s World Heavyweight Championship, WWE Tag Team Champion (as part of Team Hell No), Smackdown’s Money In the Bank, and Intercontinental Champion. Bryan is also the the 26th Triple Crown Champion and the 6th Grand Slam Champion in WWE history.

Brie revealed to E! Network that she and Bryan are currently trying to have a second child. “I might be doing a little baby making for number 2,” she said. “Birdie is 18 months, I’m gonna be 35 next week… I think it’s time!” When asked what gender she is hoping for, Brie revealed that Bryan is pulling for a boy. “My husband would love a boy, but because I have a sister I would love for Birdie to have a sister. [Daniel] is dying to have a boy because he’s the last Danielson. I guess it’s very important for men to keep the name going.” 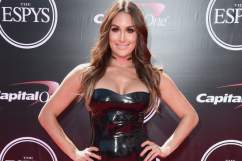 Nikki Bella Boyfriend: Is the WWE Star Dating Anyone?