Instagram Demi Burnett, one of the contestants on The Bachelor.

Demi Burnett, one of the former contestants on the last season of The Bachelor, is a southern country girl, born and bred in Texas. Passionate, bubbly and blonde, she was dubbed the “villain” of this season and was very intent on winning, claiming she didn’t mind if she has to “get her hands dirty” to do so.

“My friends and family would describe me as super bubbly and outgoing, a little sassy country girl. I don’t mind getting my hands dirty and having fun,” Demi said on the Bachelor premiere, before adding, “I’ve never had a serious relationship.”

Here’s what you need to know about Demi Burnett:

1. Her Mother Served Time in Prison for Bank Fraud & Has a Criminal History, Including Committing Forgery & Grand Theft in 2007

Burnett hasn’t been shy about sharing her personal life with fans since she first appeared on The Bachelor. During an early episode of the show, she was filmed having a conversation with her mother, who serving time in prison for bank fraud at the time of the call.

During the episode, Burnett spoke with her mother about her release date and told the cameras that her mom is “actually going to get out very soon” and she hoped that the next time she sees her would be with Colton Underwood, this season’s bachelor. Her mother was apparently serving an 18 month sentence at FMC Carswell prison in Texas for conspiracy to commit bank fraud, which also wasn’t her first run-in with the law. Tina Jean Jordan, Burnett’s mother, also served time back in 2007 for embezzlement, as well as a slew of other charges over the years, including violating her probation, committing grand theft, and committing forgery. 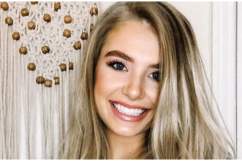 Demi Burnett’s Father: Who Is Her Dad?

2. Burnett Says She is Closer to Her Father Than Her Mother & Her Father Helped Research Colton Underwood Before She Started Filming The Bachelor

I wonder if this is going to be THE MOST DRAMATIC SEASON YET?!?!? #thebachelor

Although Burnett claims she and her mother still have a solid relationship despite the time she spent in prison, she admits that she feels closer to her father. “I live with my dad and my stepmom,” she revealed in her intro video. “My dad always had the proper environment for us so we’ve always been with him.”

Burnett admits she didn’t know much about Underwood before going on the show, but her dad did some research. “My dad approved, and that’s all I needed to hear,” she said. “I usually don’t bring a lot of guys around or anything, so he ensured me that [Underwood] would be worth it.”

Burnett actually doesn’t even remember signing up to be on The Bachelor (due to a wine date with some gal pals), but after her father took the time to look Underwood up, he gave Burnett his “approval” to date him

3. She Was The First Woman to Exit The Limos to Meet Underwood & Immediately Commented on His Virginity

“I will HAPPILY accept your rose” ?? #thebachelor

Not only did she drop the prison-mom bombshell on the first episode of The Bachelor, she was also the first woman to exit the limos to meet Underwood, who then proceeded to greet him by immediately bringing up his virginity.

“So, I have not dated a virgin since I was 12, but I’m excited to give it another shot.” She also later added: “If you’ve only ever had a vanilla cupcake, well, how do you know you don’t like chocolate? How do you know you don’t like strawberry? So you’ve got to try out all the cupcakes first to know what you really want. I’m the damn confetti cake.” 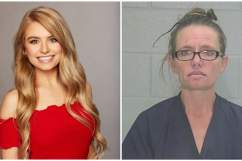 Demi Burnett’s Mother Is In Prison for Bank Fraud

4. She Had No Problem Stirring Up Controversy Throughout Her Time on The Show

The face when you realize you voluntarily signed up to date a man along with 29 other women…. ?? TOMORROW IS THE DAY FOLKS #thebachelor

Burnett quickly gained the title as the “villain” of the last season of The Bachelor, after easily establishing herself as the vocal contestant who wasn’t afraid to get what she wants. Although there is always “that one girl” on The Bachelor who gains a bad rep right away, Burnett dived in head first with her virgin comment (see above).

During episode two, she also boldly kissed Underwood in front of the other girls during a group date. While performing a group date challenge at the Regent Theater, she ran off the stage to share smooches with Underwood, which was broadcast to hundreds of audience members, as well as the rest of the group.

She was also the first to ask Underwood for private time, snatched a rose during a group date and declared it was hers, and interrupted another contestant’s conversation with Underwood to invite him to join her for “private time” in a closet, among many other things.

5. Underwood Sent Burnett Home After He Realized He Didn’t Share The Same Feelings As She Did

In 2018, this guy changed my life ?? #thebachelor officially ONE WEEK AWAY AHHHH ❤️❤️

Unfortunately for Burnett, Underwood sent her packing during a previous episode of the show, after she spilled her heart out and told him she was falling in love with him. According to Reality Steve, Underwood didn’t share the same feelings as Burnett, and didn’t want to put her through a rose ceremony when he knew how he felt.

“At some point in the episode, Demi went to his room to talk and Colton eliminated her because his feelings weren’t the same for her as hers were for him. Didn’t want to put her through a rose ceremony when he knew she wasn’t the one, so he sent her home.”