Getty Kit Harington's height has been a topic of debate for several years now, with fans and media outlets speculating on how tall the Game of Thrones actor actually is. Read on to find out how tall Kit Harington actually is.

Kit Harington, an English actor best known for his role as Jon Snow on HBO’s Game of Thrones, will be back again to battle the Army of the Dead  when the eighth and final season premieres this Sunday, April 14. With the season premiere right around the corner, fans of the actor may find themselves wondering about his personal life.

Harington was born Christopher Catesby Harington in Acton, London, to his mother Deborah, a former playwright, and father David, a businessman. The British actor was born on December 26, 1986, making him 32-years-old, and stands at 5’8″ tall, or 172 cm, according to Celeb Heights. Other publications have listed his height at anywhere between 5’6″ to 5’9″, although 5’8” is the most widely reported.

Here’s what you need to know about Harington:

According to Esquire, Harington’s stature was one of the reasons casting directors liked him, and part of the reason he was cast as Jon Snow to begin with.

“He just had the look,” showrunners David Benioff and D. B. Weiss told Esquire. “The brooding intensity; the physical grace; the chip-on-the-shoulder quality that we always associate with extraordinarily short people.”

The character Jon Snow is never described as a tall man in the books, nor is he described as terribly short, although he obviously grows as he ages throughout the books. There is a scene where Jon expresses some annoyance that Joffrey Baratheon is taller than him even though he’s only 12-years-old, but other than that, his height isn’t really a topic of focus in the books. 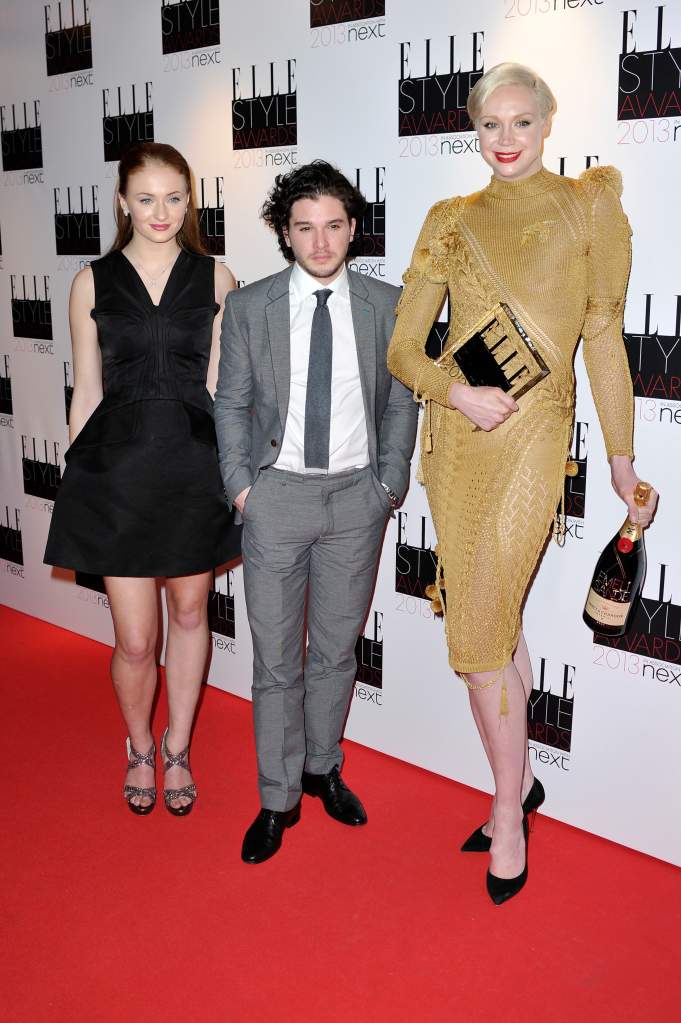 LONDON, ENGLAND – FEBRUARY 11: Sophie Turner, Kit Harington and Gwendoline Christie pose with the award for Best TV Show for Game of Thrones in the press room during the Elle Style Awards at The Savoy Hotel on February 11, 2013 in London, England. (Photo by Gareth Cattermole/Getty Images)

There have been dozens of articles over the years that have questioned how tall Harington is, with plenty of outlets and fans alike suggesting the actor wear “elevator shoes” to increase his height while filming, and others speculating that the show uses different camera angles to make him appear taller than he actually is, which isn’t uncommon to do in the film industry.

Jezebel released an article in 2015 with the headline “No One Knows Kit Harington’s Real Height” while Bustle attempted to compare him to his costars, including Gwendoline Christie, Sophie Turner and Emilia Clarke. However, the general consensus is that Harington is at least 5’8″, especially when compared to his wife and former costar, Rose Leslie, who is 5’6″.

Harington was named after 16th century British playwright and poet Christopher Marlowe, whose first name was shortened to Kit, which Harington also prefers. Harington didn’t actually know his real name was Christopher until he was 11-years-old, according to an interview with CNN in 2012.

“I was called Kit from day one, really, I only found out my name was Christopher when I was 11. I went to school, and I remember that you had to do these tests to find out what set you’re in—how clever you are. I put down ‘Kit Harington’ and they looked at me like I was completely stupid, and they said, ‘No, you’re Christopher Harington, I’m afraid.’ It was only then I learnt my actual name. That was kind of a bizarre existential crisis for an 11-year-old to have, but in the end I always stuck with Kit, because I felt that’s who I was. I’m not really a Chris.”

Tune in Sunday, April 14 at 9/8c to catch the eighth and final season premiere of Game of Thrones, only on HBO.

READ NEXT: Joe Dempsie Girlfriend: Is the ‘GoT’ Actor Dating Anyone?

Read More
Game Of Thrones
Kit Harington's height has been a topic of debate for several years now, with fans and media outlets speculating on how tall the Game of Thrones actor actually is.