Tonight, ABC is presenting two live-recreations of classic sitcoms: All In the Family and The Jeffersons. The joint special will last 90 minutes and will be hosted by Jimmy Kimmel. The stellar cast for the special includes Woody Harrelson, Jamie Foxx, Marisa Tomei, and Wanda Sykes. Other special guests include Will Ferrell, Anthony Anderson and Kerry Washington.

‘All In the Family’ & ‘The Jeffersons’ Preview

Yeah we're movin' on up to the east siiide! Join us for #LiveInFrontOfAStudioAudience TONIGHT at 8|7c on ABC.

Norman Lear, the producer behind both shows, will be involved in tonight’s revival. Lear talked to Deadline about bringing his original shows back, and how they hold up by modern standards. “I’ll tell you, seriously, the most amazing thing is listening to these two shows where we agreed word for word we would not change a word, and nothing has been changed, and I can’t believe how relevant it is to this moment,” he revealed.

“Every f–king word is relevant to this moment. Also all by itself, there’s nobody else doing it,” he added. “That’s a shock and it means It’s going to seem brand new to millions of people.” Lear also discussed the renewed interest that both shows have received from fans, and whether he has plans for the future. “We’re not doing that episode at all. I can tell you truthfully that at this moment, this is a one shot,” he assured. “There has been no discussion of any kind about anything else with All In the Family or The Jeffersons, but I can’t believe the excitement around it.”

Lear’s producing partner, Brent Miller, said that they hoped to connect with a new generation of viewers. “The reason we chose the title Live in Front of a Studio Audience: Norman Lear’s All In the Family and The Jeffersons is because we hope to establish a brand here or a franchise and do this again with various classics from TV history,” he explained. “It’s very much in conversation and we are excited that those conversations continue.” 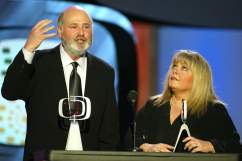 ‘All In the Family’ Original Cast: Then & Today