The Blacklist wraps up its sixth season tonight on NBC. The crime drama follows the adventures of FBI profiler Elizabeth Keen as she confronts and works alongside ex-government agent Raymond “Red” Reddington. Given that the series has been on the air for six years, there are some fans wondering whether it is cancelled or renewed for another season.

According to Deadline, The Blacklist has been renewed for a seventh season. Ratings for the series has remained consistent, averaging 1.2 rating in adults 18-49 and 7.3 million viewers overall in Live+7 Nielsen ratings. It’s also been a strong delayed gainer for NBC, growing by 119% from Live+Same Day to L+7 in adults 18-49 (from a 0.57 rating to a 1.25) and by 3.4 million viewers (3.9 million to 7.3 million).

‘The Blacklist’ Has Been Renewed for Season 7 on NBC

Get to know the real Raymond Reddington. #TheBlacklist returns Fridays this fall on @NBC.

Lisa Katz and Tracey Pakosta, the co-presidents of Scripted Programming at NBC, issued a statement where they congratulated the cast and crew of The Blacklist. “Congratulations to our amazing producers, cast and crew, all of whom continue to work at the top of their game and make The Blacklist one of NBC’s signature series,” they wrote.

Deadline also reports that the main cast members have all signed on for another season. The network inked new deals with Megan Boone, as well as recurring cast members Diego Klatenhoff and Harry Lennix. The series lead, James Spader, renegotiated his contract early on, adding a season well before his other co-stars were approached. Spader recently told Parade that he’s proud of what they’ve managed to do with the series. “[It] feels like you’re standing on top of a hill, and you can see where you started and you can see where you’re going to end, but also there’s a certain satisfaction in telling that much story,” he said.

Stars James Spader & Megan Boone Have Been Confirmed to Return

Looking dashing as ever: James Spader at #NBCU2019. #TheBlacklist

John Eisendrath, one of the show’s executive producers, talked to Hollywood Life about the season six finale, and how it sets up where the characters will go. “It resolves the season 6 plot story about the president and Anna McMahon. It opens up an entirely new direction in the lives of Red and Liz,” he explained. “It will set the audience on a path to learning new truths about people who are central to Red and Liz and new truths about their history and what will make their relationship entirely different going forward.”

Series creator Jon Bokenkamp was similarly vague about the upcoming season. “The story we’ve told this year, of Liz’s quest to find out Raymond Reddington’s identity — and the answer that Dom gave her in Episode 19 — is one that brings Liz even closer to Raymond Reddington, not farther apart from him,” he told TV Insider. “He never liked the idea that she was looking into this, he has made that clear from the beginning… What that portends, going forward, is continued friction on the question of his real identity.” 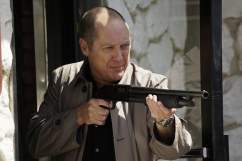 Read More
NBC, The Blacklist
Is 'The Blacklist' over? Find out whether the NBC series has been cancelled or renewed for another season.