Tyler, The Creator and Jaden Smith have a unique relationship. From their musical collaborations to their alleged romance, the two rappers have often been linked to one another.

Both Tyler, 27, and Jaden, 20, have entertained rumors about their sexuality, and the latter went as far as to say that Tyler was his boyfriend during a 2018 concert. Tyler has not confirmed or denied Jaden’s claim. Read on to learn more about the artists and their connection below.

Here’s what you need to know about Tyler and Jaden:

1. Tyler Has Been Friends With Jaden Since 2013 & They Collaborated on His Album ‘Flower Boy’

Tyler and Jaden’s friendship dates back to at least 2013, when the former mentioned hanging with Jaden during a Tim Westwood interview. Tyler admitted to ruining the sneaker collection in Jaden’s room, and then he slide down the banister of his stairs on a skateboard. “It was really funny,” he said. “I’m a d*ck… [But] that’s my n**ga, I f*ck with Jaden.”

On March 6, 2015, Jaden tweeted at Tyler, and said that he “loved” the rapper. “I Think Im In Love With You, I Don’t Know I’m Still Figuring It Out But In The Meantime, Happy Birthday,” he wrote. In 2017, Jaden popped up on Tyler’s Instagram during the recording his album Flower Boy. He’s shown rapping the verse that would eventually wind up on the track “Pothole.” This marks the only time the two rappers have officially worked together.

Jaden also appeared in the music video for “Potato Salad”, a 2018 collaboration between Tyler and A$AP Rocky. While he doesn’t say anything, Jaden can be seen standing behind the two rappers and sitting in a jeep during Rocky’s second verse. Check it out here.

2. Jaden Claimed That Tyler Was His Boyfriend At the 2018 Camp Flog Gnaw Carnival

The rumors that Tyler and Jaden were dating started after their joint appearance at the Camp Flog Gnaw Carnival in November 2018. While on stage, Jaden praised the rapper and told the crowd that he “loved” him. “I just want to say Tyler, The Creator is the best friend in the world and I love him so f**king much,” Smith said. “And I want to tell you guys something. I want to tell you. Tyler doesn’t want to say, but Tyler’s my mother f**king boyfriend, and he’s been my mother f**king boyfriend my whole f**king life. Tyler, The Creator is my f**king boyfriend. It’s true.”

Tyler reacted to Jaden’s announcement by wagging his finger at him and shaking his head before laughing. Days later, Smith tweeted at Tyler and wrote, “Yup @tylerthecreator I Told Everyone You Can’t Deny It Now.” Tyler responded by saying, “Hahaha. You a crazy n**ga man.” The tweets have since been deleted.

Tyler has not said anything else regarding these dating rumors. Jaden has since doubled down on his claims, however. When asked to clarify his comments during a Beats 1 Radio interview, he said: “I recently said that Tyler, The Creator is my boyfriend, and that’s true. So, just so you know.”

3. Both Tyler & Jaden Were Rumored to Be Dating Close Friend Kendall Jenner

NOT POSSIBLE, WE'RE BOTH GAY https://t.co/xoCXLyThPv

Tyler and Jaden have a mutual friend in model Kendall Jenner, and their friendship with her has led to rumors that they were dating her at different times. The rumors involving Jaden and Kendall started in 2015, when the two were seen hiking and cozying up to one another on Instagram.

While the rumors were eventually squashed, Jaden and Kendall remain close. They were photographed getting brunch together in December, and the latter recently attended a Jaden concert at Schimanski in Brooklyn. Page Six reports that the concert was supposed to a “secret event”, but news got out and the venue was overrun.

The rumors involving Tyler and Kendall started in 2016, when they were spotted at the Grove in Los Angeles. Kendall poked fun at the rumors by tweeting out, @f*cktyler apparently we’re dating,” to which Tyler responded, “Not possible we’re both gay.”

4. Jaden Considers Tyler to Be a Musical & Stylistic Influence on His Career

Jaden has been forthright about his admiration for Tyler, both as a friend and as a fellow artist. He said that Tyler helped with the conception and release of his debut album Syre, which pulls influence from the aforementioned Flower Boy. Despite this, Jaden said that he made a point of avoiding obvious comparisons, and tried to establish a sound of his own.

“There are a lot of people that you can feel in there. But for the most part I’m really trying to create my own sound that’s never been heard,” he explained. “When I hear somebody else’s song and there’s different pieces in that song that I really like, my whole goal is to try to make a song where I love the whole thing, and this is my passion, this whole song has been perfectly made for me, you know?””

In 2018, Jaden told GQ that Tyler is one of his three biggest style influences, and the only one who is an actual person (the other two were Batman and the Greek god Poseidon). Jaden credits the rapper with turning him onto his favorite brand, Supreme. “I mean, Tyler showed me Supreme,” he said. “Like, I never cared about Supreme until Tyler.”

5. Tyler Has Refused to Label His Sexuality & Says That the Speculation Is ‘Cool With Him’

Tyler’s sexuality became a hot-button topic after the release of Flower Boy, as several tracks hinted at having romantic feelings for other men. The track “I Ain’t Got Time” features the lyrics “I’ve been kissing white boys since 2004.” Tyler also hints at his sexuality on the song “Garden Shed.” The rapper talked to Fantastic Man about his sexuality, and how he knew that his lyric choices would raise questions.

“It’s still such a grey area with people, which is cool with me,” he explained. “Even though I’m considered loud and out there, I’m private, which is a weird dichotomy. The juxtaposition of loud and quiet is weird.”

As for why he waited until his fourth studio album to speak about his sexuality, Tyler said he doesn’t yet have an answer. “It’s a literal question and the thing about humans is we hate not having an answer,” he continued. “We hate not being in the know. So people will bullshit answers, make sh*t up, instead of being just, like—I don’t know. There are some things that are just unexplainable.” 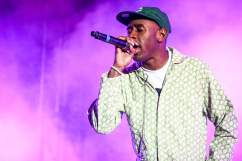 What Time Will Tyler, The Creator’s ‘IGOR’ Be Released?