For those of you who cannot wait to see who Hannah B. picks at the end of The Bachelorette 2019, we have all the info you need on the season 15 winner. Hannah Brown is on a journey to find love and, she reportedly finds it with at least one man. In fact, she gets engaged to him on the finale. So, who does she get engaged to? Who won?

Before we get into the end-of-season details and who wins Brown’s heart, THIS IS YOUR MAJOR SPOILERS WARNING. Do NOT continue reading if you do NOT want to know who Brown ends up with on the finale.

With that out of the way, let’s get into the reported winner. At first, Bachelorette blogger Reality Steve stated that Tyler Cameron is the winner this season, but, recently, he corrected himself and revealed that Cameron is actually the runner-up. The winner, according to Reality Steve, is Jed Wyatt. Steve explained that, “3 weeks ago I started hearing that Hannah was with Jed and not Tyler. Started looking into it, and the Tuesday before I left for Vegas is when I got the most interesting tip about a possible Hannah and Jed engagement. So I’ve spent the better part of the last two weeks doing all I can to figure out its legitimacy. And now I finally feel comfortable and can report: Hannah chose Jed at the end and they are engaged.”

He continued, “The info about Jed from 3 weeks ago is as solid as I can get and I just have to leave it at that. I’m well aware people will still hold out hope it’s Tyler and you have every right to. All I’m doing is telling you what I was told based on the people I’ve spoken with, the information I’ve seen, and frankly, one major piece of information that’s floating out there. I’m confident in this and I’ll leave it at that … It’s Jed, they’re engaged, and that won’t change from me the rest of the season.”

Ahead of the big reveal that the reported winner was incorrect, Brown spoke with Entertainment Tonight about her journey to find love and what she was looking for in a mate. Brown revealed, “I want fierce, unconditional, wholehearted love … and that’s making sure that I know that this is for real and that somebody’s there for me and will love me in my high points and my low points and the way that I show them all of that.” She also revealed that she is currently very “happy”, so it seems she is pleased with the man she has chosen. 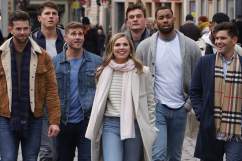