On January 1, 2019, Larissa Dos Santos Lima and ex-husband Colt Johnson finalized their divorce. The 90 Day Fiance couple revealed their chaotic marriage to viewers on the show and took fans on a trip from the start to the end of their relationship. They were only married for a few months and, in that time, Lima had been arrested three times for domestic situations with then-husband Johnson.

Now, Lima has moved on and she has a new boyfriend, who she met on a dating app. Lima told Us Weekly, “We met on Tinder. He never watched the show… I just wanted company… I feel really comfortable with him.” to Reality TV World, Nichols was the first man Lima went on a date with after her breakup with Johnson and they made their relationship public in March 2019.

Get to know more about Nichols, his relationship with Lima and how he’s communicated with her ex-husband, Johnson below. And, see more photos of Nichols and Lima together.

Lima and Nichols have been showing off their relationship in tons of photos on their social media accounts. Nichols posts pics of their many local adventures and outings on his Instagram. Nichols just made his Instagram account private. In an interview with In Touch Weekly, Lima said, “We are always making new jokes, having more laughs, taking new adventures, seeing new pools and planning more trips.”

Lima then said, “He makes me laugh. He’s accomplished so much for being 27 years old only — and I can’t forget he’s a hunk.”

Nichols does not appear on 90 Day Fiance: Happily Ever After? with Johnson and Lima but he does show up on at least one of the tell-all specials. When Lima appears on the special via video conference to talk to Johnson, Nichols appears, which greatly upsets Johnson. Johnson shouts, “Who the f-ck are you?! Get the f-ck off the screen!”, to which Nichols replies, “Face the facts, it didn’t work.” Johnson again yells, “You’re not part of this dude, get the f-ck off!”

In an interview with In Touch Weekly, Lima said that Nichols is more “independent and open-minded” than her ex.

Though Lima had a rocky time on 90 Day Fiance, she told In Touch that she doesn’t regret being on the show. She explained, “90 Day Fiancé was a great experience. I love that I connect with people that always support me … I never forgot that my ‘dream’ was just to do CVS and buy Maybelline or visit Walmart.”

Lima said that she and Nichols have been “serious since day one,” according to In Touch Weekly.

Both Lima and her ex Johnson had divorce parties, but Lima’s date was boyfriend Nichols. According to E! News, Lima was celebrating her divorce in early March 2019, at the Las Vegas strip club Crazy Horse 3, which is also where Johnson celebrated his. Lima reportedly brought new boyfriend Nichols to party with her and this was Lima’s first public appearance with him. At the event, Lima called her new man a “major upgrade” from Johnson and compared him to the late Frank Sinatra. She also said, “He is like a dream … I feel in peace. I thought that be happy was a dead dream. Now I see how much is important kiss and hugs.”

Lima told In Touch Weekly that she and Nichols aren’t rushing into anything, despite being very committed to each other. She said they’re taking their time with their relationship. 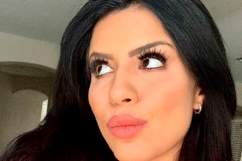