When Mike “The Situation” Sorrentino pleaded guilty to tax evasion, he faced possible time in prison. Ultimately, he had to go to jail and cameras were rolling when it all went down. Now that he’s behind bars, it makes one wonder when he gets out of prison.

Both Sorrentino and his brother, Marc, pleaded guilty to tax evasion charges in January 2018, after originally being indicted in 2014. Mike Sorrentino initially was charged with one count of conspiracy, two counts of filing false tax returns, and one count for allegedly failing to file a tax return. Additional charges were added in 2017. Marc and Mike Sorrentino both admitted to filing falsified tax returns on nearly $9 million of income, according to NBC News. They reportedly did this using two companies they controlled- MPS Entertainment, LLC and Situation Nation, Inc.

Read the indictment documents for Mike and Marc Sorrentino here.

Read on below for a rundown on Sorrentino’s release date, his charges, his sentencing, what life is like for him in jail, and the plans for when he is released.

On Jersey Shore Family Vacation, fans got an inside look at Sorrentino’s sentencing. Fortunately for him, his prison sentence has ended up being 8 months and he is set to get out of jail on September 12, 2019, according to Entertainment Tonight. Sorrentino was not taken into custody at his sentencing and was able to turn himself in to serve his sentence in January 2019.

Marc Sorrentino was sentenced to two years in prison for the fraud charges. In addition, the brothers’ accountant, Gregg Mark, admitted to filing the false returns. John R. Tafur, Special Agent in Charge, IRS-CI, Newark Field Office, released the following statements about the Sorrentino brothers’ convictions, “Tax crimes, plain and simple, are an outright theft from the hardworking American public. The courts recognize the severity of these crimes and now Michael and Marc Sorrentino are convicted felons with prison sentences to serve for intentionally disregarding their tax obligations to our country.”

One month after Mike Sorrentino’s sentencing, he married longtime girlfriend Lauren Pesce, with MTV cameras rolling. Fans will have to wait and see if Jersey Shore Family Vacation will film Sorrentino’s release for a new season.

Don’t miss a 2-hour episode of #JSFamilyVacation beginning at 8/7c on @MTV! #FREESITCH

When Sorrentino gets out of jail, he has a lot waiting for him. In an interview with Us Weekly, his fellow Jersey Shore castmates said they are going to throw him a huge party to celebrate his release. Jenni “JWoww” Farley told Entertainment Tonight that, “He’s like, ‘I can’t wait to get home, little sis. I miss everybody.’ So positive. I hope we do get to celebrate his birthday when he gets home though. Even though it’s passed, like, we have to have a big party for him.”

Reflecting on the day that Sorrentino was sentenced, Nicole “Snooki” Polizzi told ET Online, “We felt like we were going to a funeral. We didn’t know what to expect with Mike, and he’s like our brother, so it was terrifying for all of us.” All of his cast members showed up to the courthouse to greet him before he went inside. Only two of them went into the courtroom so they didn’t draw a lot of attention. The two who went inside were JWoww and Vinny Guadagnino.

Sorrentino’s jail stay is at Otisville Federal Correctional Institution in New York and castmate Pauly D told Kelly Ripa on Live! With Kelly and Ryan that Sorrentino’s wife visits him weekly. And, several of Sorrentino’s castmates have visited him as well. Pauly D said he talks to Sorrentino every day by using a special app.

When talking about the atmosphere at Sorrentino’s correctional facility Pauly D said on Watch What Happens Live with Andy Cohen that, “He’s doing really well. I went there to visit him and I thought they were going to basically strip search me and stuff like that—wasn’t the case. It was very laid-back. He’s happy, positive … He’s just so happy to get it over with and he just wants to come out.”

In addition to serving time in jail, when Sorrentino gets out, NBC News has reported that he will serve two years of supervised release, 500 hours of community service, pay $123,913 in restitution and pay a criminal fine of $10,000.” 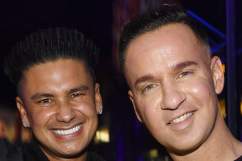