Instagram Laura and Aladin, stars of the hit reality series "90 Day Fiance: The Other Way."

90 Day Fiancé fans are scrambling to figure out if fan-favorite couple Laura and Aladin Jallali have filed for divorce, or if the couple is still together following last week’s explosive episode. After episode 10 aired on July 29, Aladin went through and deleted all of his photos of his wife off of his Instagram account, so fans are left wondering if the two split up.

For those who need a recap, last week’s episode involved a pretty intense argument over Laura and Aladin’s sex life; Aladin was offended when Laura brought out a sex toy to “spice things up” in the bedroom, and he ended up storming out of the house after telling her “f–k you.”

In the clip above, she tells him its a sex toy for “jiggy jiggy” and he does not take it well. He says “what the f–k, f–k you,” and jumps out of the bed. He asks her if she is “for real” and she says the toy would just be to “spice things up,” which prompts him to ask her if they really need to.

“You know, in America, lots of ladies have those things,” Laura tells Aladin, who responds “I am not in America. So don’t tell me ‘in America,’ ‘in America.’ You are not in America.” Aladin then tells Laura he needs to calm down and leaves the house. During a confessional, he mentions that he felt disrespected when she handed him the toy and that he was really upset about the incident.

Following the episode’s premiere, Aladin removed all of the photos of Laura from his Instagram account. Prior to the episode, Aladin had dozens of pictures of the two together and often gushed about his wife on the social media platform. Laura’s account hasn’t been changed, and she has posted at least two pictures of Aladin since the episode aired, so fans have been speculating that Aladin might have taken down the pictures purposely to spark some extra drama for the show. 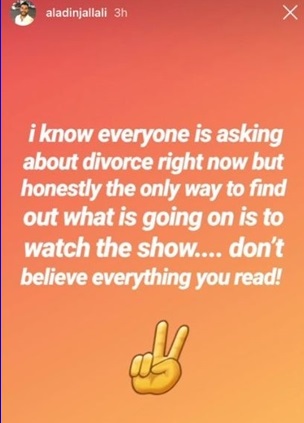 A screenshot of Aladin’s Instagram stories telling fans not to believe everything they read.

The couple has neither confirmed nor denied the divorce rumors, although Aladin did take to his Instagram stories to tell fans that they “shouldn’t believe everything [they] read.” The entire post, which can be viewed above, reads “I know everyone is asking about divorce right now but honestly the only way to find out what is going on is to watch the show …. don’t believe everything you read!” followed by a peace sign emoji.

Aladin is still under some sort of contract with TLC, which likely stops him from saying much more about his relationship status at this time. However, TV Shows Ace questioned how real the drama between the two actually is, considering the sex toy episode was filmed months ago. The publication wrote, “is [it] just another set of IG boomerang busts and deleting, blocking, unfollowing that’s synonymous with the show? That scene [was] filmed months ago. Did Aladin think they’d never actually screen it?”

As mentioned above, Laura still follows Aladin on Instagram and has posted a few more pictures of the two together since the episode aired, so Aladin’s sudden Instagram purge does come off a bit scripted.

Like Aladin said, fans will just have to wait and see what goes down by continuing to tune in Monday nights at 9/8c on TLC to catch the newest episodes of 90 Day Fiancé: The Other Way. However, Aladin was just vehemently defending his wife on Instagram and expressing how much he loved her shortly before his Instagram fit, which you can read more about below, so we don’t believe the two have called it quits just yet.