A reboot of the series Beverly Hills 90210 was being created when former star Luke Perry unexpectedly died. On March 4, 2019, at the age of 52, Perry died after suffering a massive stroke several days prior, as reported by TMZ.

Perry was hit with a stroke on the same day that 90210 announced a reboot series titled BH90210, which Perry had not signed on for. But, Jennie Garth later revealed on an episode of Watch What Happens Live that Perry would have been involved in the series in some capacity. Many of Perry’s co-stars had signed on for the reboot, which would feature each of them in “heightened versions of themselves”.

One person who hadn’t been a part of the show initially was Shannen Doherty, but she said she changed her mind after the death of Perry, who played her love interest, Dylan McKay, on the series. Fox News reported that Doherty said, “When Luke passed away, things drastically changed for me. And I felt like it was a great opportunity to sort of honor him. And then I really liked to be in that position because now I get to sit up here with a lot of people that you know, I respect and I love … And we have been on this amazing journey together where we also try to really sort of heal through losing somebody who means the world all of us.”

Executive producer Chris Alberghini confirmed to Fox that Perry’s death would be talked about on the show, as they wanted to pay tribute to the late star. He explained, “A lot of thought went into it. We knew we had to acknowledge and pay tribute to him … Obviously, it was a very painful loss for the cast and everyone who knew him, and we wanted to do it in as respectful a way as possible. It was something that we discussed a great deal with everyone in the cast and trial and error … There were a few things that we tried that didn’t work and then we found a way that we all felt comfortable with and we felt honored him appropriately.”

Some of the cast opened up to People about missing Perry during filming. Garth said, “There are so many layers of grief. It’s been really intense. I still don’t like admitting that it’s true.”

Brian Austin Green confessed that, “I can be reading a rewrite and Luke is mentioned and I just fall apart. Luke was an older brother to me. And it seemed like he was going to be around forever.” He continued, saying, “A lot of people have said, ‘The show, won’t be the same without Dylan.’ And I agree. But the reality is he is no longer here to share it with us. So, we will pay homage to him in the best way possible.”

In addition to Luke Perry being honored on BH90210, he is also honored on the hit show Riverdale, which he was starring on when he passed away. In a sweet and interesting twist, 90210 castmate Shannen Doherty was a part of the Riverdale tribute, according to E! News. The Riverdale premiere tribute will air on October 9, 2019 and, after taping the episode, Doherty wrote on Instagram “I am deeply honored to pay tribute to Luke on Riverdale. The care in which this show takes in honoring his memory is beautiful. He is missed. Today. Tomorrow. Forever.” 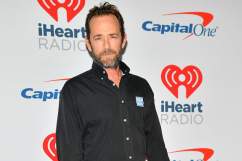 Did Luke Perry Have a Girlfriend? Was He In a Relationship When He Died?

Read More
Celebrities, Luke Perry, TV
Luke Perry's death left an impact on his former 90210 castmates. Now, with the 2019 reboot BH90210 underway, Perry and his character will be honored.