Chance the Rapper is one of the hottest stars in rap music. His colorful personality and charisma has enabled him to rise up the ranks and dominate the genre, as well as commercials and television. But is Chance married? Is the popular emcee single or is he in a relationship?

Chance is married. He married Kirsten Corley on March 9, 2019 after several years of dating. Chance talked to PEOPLE about his relationship with Kirsten, and how they first met when they were children. “My mom worked at a real estate agency with her mom,” he recalled. “Her daughters love to dance so they did a choreographed dance at this real estate party that I was at when I was 9. I saw her dancing and I was like, ‘Let’s get married!’”

Happiest birthday to my BFFL ? God was surely up to something when he created you and I’m so eager to see what he’s going to do in your 26th year of life!!!! My baby daddy 2x, my 4ever boyfriend, my rock, my life partner, MY HUSBAND. Love you more than words. ?????

Chance gave more details about Kirsten in a lengthy Twitter thread. He said that he knew he wanted to spend his life with her once he saw her performing. “I really shouldn’t even say locked eyes cause really, I was just staring at her; as she and her girls were conquering this choreography and mastering the art of lip-syncing in a way even the most professional performers have yet to accomplish,” he wrote.

“This wasn’t the time or the place. Not just because it wasn’t my party, not because it was their moment to dance, not even ’cause I was nervous about dancing in front of folks. It’s ’cause I knew I was gonna marry that girl and I ain’t wanna jump the gun,” the rapper added. “So I shook my head with anxiety, moved to the back of the crowd, and never even introduced myself.”

Chance & Kirsten Met When They Were Children & Began Dating In 2013

Chance and Kirsten officially began dating in 2013, the same time the former dropped his breakout mixtape Acid Rap. The couple gave birth a daughter named Kensli two years later. They briefly separated in 2016, but they got back together, and became engaged at a family barbecue on July 4, 2018. Chance broke the news on Instagram with a caption that read: “She said yes.” They welcome a second daughter named Marli in September 2019.

Chance credits Kirsten with saving his life and allowing him to embrace his faith. “One song on my album has my best verse that I written in my life,” he said while on Queen Radio. “It’s called ‘We Go High.’ I explain that my wife literally saved my life by becoming celibate and going and getting baptized. It changed her life obviously, but we talking about me right now. It changed my life for real. Now I know exactly where my strength comes from.”

Chance also said that his marriage was the inspiration for his debut studio album The Big Day. “The whole album has been inspired by the day that I got married and how I was dancing that day,” he told Beats 1 Radio. “We had a reception with the legendary DJ Pharris. And we all danced our hearts out. It was the hardest I ever danced in my life and I’m a great, longtime dancer. Everything in it is all the different styles of music that make me want to dance and remind me of that day and remind me of that night and all those people that were there.” 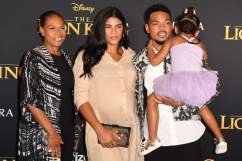