The Masked Singer season 2 episode 5 aired on Wednesday, October 16 at 8/7c on Fox. The episode, titled “Once Upon a Mask,” will see Thingamajig, Black Widow, Butterfly, Flamingo, Leopard and Skeleton take the stage. Guesses were made, clues were given, and at the end of the episode, one eliminated celebrity was unmasked.

BEWARE OF SPOILERS and stop reading now if you are not caught up and do not want to know what happened during season 2 episode 5 of The Masked Singer. This article will be updated live as the episode airs, so keep checking back for more information.

8:05 – Flamingo airs a clue video for the judges to analyze. The video includes shots of old tires and a petrol station. Flamingo’s voice says “It reminds me of when I first started out and went from hood rat to Hollywood triple threat.” She also talks about her upbringing. “I come from humble beginnings with absolutely zero connections,” she teases. “Until, one day, I was discovered by a powerful wizard, who plucked me off my stoop and led me into a dream.”

8:10 – Flamingo is the first contestant to perform tonight, and she gives a bouncy cover of “Footloose” by Kenny Loggins. The judges are uniformly impressed, and they praise Flamingo for her charismatic stage presence. “What a way to kick off the show,” said judge Jenny McCarthy. “I was smiling so big you broke my botox.” McCarthy guesses that Flamingo could be Adrienne Bailon, while Nicole Sherzinger throws out Ally Brook as a potential candidate.

8:15 – Leopard is up next. He screens his clue video, and it’s rife with telling details. “After all my years at the top, it was humbling to almost lose my mask in the Smackdown,” he tells the panel. “It made me more determined than ever to prove that I’m still a primetime champion.” Leopard continues to use words that are associated with wrestling. “As the leopard, I want to be a hero in their eyes,” he reveals. “That would be my greatest title yet.”

8:20 – Leopard performs a heart-wrenching cover of “Stitches” by Shawn Mendes. The panel complimented him for his “ambitious” performance, and his willingness to let his emotions show beneath the costume. McCarthy and Robin Thicke suggest that Leopard could be RuPaul, due to his “drag queen style,” while Ken Jeong throws Neil Patrick Harris out as a popular name.

8:25 – We then get to Black Widow, who unveils her latest clue video. We see her playing in a castle playhouse during the video, and reference her squeaky clean image. “Ever since I was an itsy-bitsy spider, I’ve had to embody a squeaky clean image,” she says. “While I’ve got an amazing career that has taken on all different shapes, I’ve been waiting for a moment like this.” There appears to be a framed album on the back of one of the shots.

8:30 – Black Widow performs a soaring rendition of “Before He Cheats” by Carrie Underwood. She gives the third knockout performance of the night, and the panel is left scrambling to guess her true identity. Jeong says it could be actress Tatiana M. Ali, given that imagery from the Fresh Prince of Bel-Air appeared during her clue video. Scherzinger says Christina Aguilera, and McCarthy names the celeb that’s been on most fans’ lips: Raven-Symone.

8:35 – Skeleton treats the panel to his next clue video. “It would have been a shame to unmask after my first shot at being a headliner,” he says. “You see, amigos, my life has been pretty great. Sometimes it feels like joint custody, and I’m the deadbeat dad who only gets the kids on the weekend.” Skeleton continues to hint at his reputation as an overlooked talent. “The long and short of it is that ever since childhood, I felt overshadowed,” he teases. “Being in the background has allowed me to be instrumental in orchestrating those around me.”

8:40 – Skeleton then covers “Are You Gonna Be My Girl?” by Jet. The panel throw out a wide range of entertainers who could be under the costume. Nicole throws out Teller from the magical duo Penn & Teller, while both Jeong and Thicke suggest that it could be Martin Short. The best guess so far is McCarthy, who says that Skeleton could be Paul Shaffer.

#SkeletonMask's? performance of @jet.theband’s “Are You Gonna Be My Girl” is to die for! ? #TheMaskedSinger

8:45 – Thingamajig’s clue video is filled with unique clues. We see a security agent hold up three different children’s dolls, including a mermaid. “Singing has always actually been my first love,” Thingamajig says. “My parents taught me… don’t run with the bulls. With this song, I want to show the world I’m just as warm and fuzzy on the inside as I am on the outside.”

8:50 – Thingamajig gives a performance of “Rainbow” by Kacey Musgraves that brings Sherzinger to tears. The panel are absolutely stumped. Sherzinger says she would marry Thingamajig, and throws out LeBron James as a possible name. Jeong is skeptical that the contestant is an NBA star, while McCarthy and Thicke can’t even muster a guess.

?SPOILERS ? And the celebrity behind the #SkeletonMask is….? #TheMaskedSinger

8:52 – Butterfly is the last performer of the night. She plays her clue video, which delves into her past and the personal battles she’s had to fight. “After some time in isolation, I was terrified to step out on that stage,” she revealed. “But my coming out as The Butterfly showed me I can be whomever I want to be.” There are also shots of London and Big Ben.

8:55 – Butterfly arguably gives the performance of the night with her cover of “Livin’ on a Prayer” by Bon Jovi. The panel rave over the performance, and go on a lengthy tangent about who the celebrity underneath could be. McCarthy says Butterfly could be Fantasia, while Jeong says it could be Spice Girls member Mel B. Thicke also throws out Leona Lewis.

9:00 – Skeleton is the contestant who gets unmasked tonight, and it turns out to be Paul Shaffer! McCarthy nailed her guess, and the Tonight Show bandleader bows before the audience. “This is nuttier [than anything],” he said. “It gave me a chance to try songs I never would have thought I could pull off in real life.” 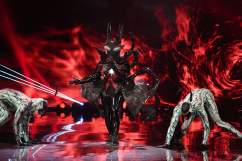 Black Widow on ‘The Masked Singer’: 5 Fast Facts You Need to Know

Read More
FOX, Reality TV, TV
Find out which contestants make it through and which get unmasked on tonight's episode of 'The Masked Singer.'