NBC Ricky Duran on 'The Voice'.

Ricky Duran is a finalist on season 17 of The Voice. He’s wowed audiences and judges alike with his impressive singing and his instrumental prowess. Ricky has also been forthcoming about his parents, who are no longer alive and who nurtured his musical talents from an early age. How did Ricky’s mother and father die?

Ricky’s mother Odette A. Duran died on on June 18, 2018, after a lengthy battle with breast cancer. She was 66. Odette supported Ricky when he first auditioned for The Voice, and she reportedly urged him to choose Blake Shelton as a coach.

Ricky’s Mother Odette A. Duran Died from Breast Cancer In 2018

My gorgeous mother passed away last night after a long battle with breast cancer. Hands down the most humble and caring person I’ve ever known. Always put her family first. I’ll live my best life for you. Love you ma. #Loveyou #resteasy #breastcancerawareness #mom

“My mom always loved Blake Shelton, and when my mom would say something about something, she was usually right,” Ricky told Parade. “She’s like, ‘Oh, I think he’s a genuine person who’s really nice.’ I think that’s huge as far as having a coach and someone guide you, because you’re putting a lot of faith in them that they’re going to help your career and actually care about you.”

Ricky’s father, Ricardo A. Duran, took his own life on July 23, 2012, after a period of declining health. He was 60. Ricardo was a musician in his native Guatemala, and he was the one who taught Ricky to play his first chords.

“My dad was a musician and he wanted to pursue that but he had a family and he stopped,” said Ricky’s sister Tomaiolo Duran. “He tried to get us girls into music but we didn’t have talent. When Ricky was 6 years old, my dad gave Ricky a guitar and you could see it. At 6 years, he was even talented.”

Ricky’s Father Ricardo A. Duran Died  In 2012 & Was His Biggest Musical Inspiration

I’ve been blessed to have had such a great family growing up. My dad put my first guitar in my hands and is truly my biggest inspiration. I owe everything to him and my mom. Every day that goes by is another day closer to seeing them again. Happy Father’s Day to this legend. #70sswag #happyfathersdays #legendario #blessedup #manythanks #youareappreciated #strat

Ricardo served as the manager and booking agent for the Ricky Duran Band, which his son started in college. “Our dad would always say Ricky was better than him but he (our dad) was unbelievable,” Tomaiolo told the Grafton News. “Our dad wanted Ricky to pursue music because he knew that it was something that just made Ricky happy.”

Ricky posted a photo tribute to Ricardo on Father’s Day 2019. “I’ve been blessed to have had such a great family growing up,” he wrote in the caption. “My dad put my first guitar in my hands and is truly my biggest inspiration. I owe everything to him and my mom. Every day that goes by is another day closer to seeing them again.”  Ricky also dedicated his latest Voice performance to the memory of his parents.

Tomaiolo believes that her parents would be ecstatic over Ricky’s success on The Voice. “Our parents would be absolutely thrilled,” she gushed. “Our mother would be taking it in and loving how happy it’s making Ricky and him getting the recognition. And my dad would just be going crazy. He was a very loud, happy, fun guy.”

Only time will if Ricky is able to win The Voice competition and become the season 17 champion. 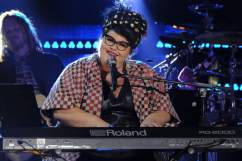 Read More
Reality TV, The Voice, TV
Ricky Duran is a finalist on season 17 of 'The Voice.' Learn about his parents and what led to their untimely deaths.