Tough cuts were made on Tuesday’s episode of The Voice. The top 10 contestants performed on Monday, and Tuesday saw the top 7 advance, with the bottom three forced to duke it out for the final spot. The bottom three gave an additional performance each, and viewers at home had to vote to determine which contestant to save.

SPOILER WARNING: Do not keep reading if you are not caught up on The Voice season 17 and do not want to know who advanced during episode 22. If you want to know who was sent home, skip to the elimination section below.

Carson Daly kicked off the show by calling the top 10 to the stage and announcing the first results of the night. Daly revealed that Will Breman (Team Legend) and Rose Short (Team Gwen) were the first contestants to be voted into the top 8.

Voice coaches John Legend and Kelly Clarkson took the stage to perform an updated version of the holiday classic “Baby, It’s Cold Outside.” Legend and Clarkson released the studio version of the song last month, which altered the lyrics to reflect the #MeToo movement. Following their performance, Daly announced that Ricky Duran (Team Blake) would be advancing to the top 8.

Meghan Trainor and Mike Sabath took the stage to perform their latest single, “WAVE.” Once the guest stars exited, Daly returned to deliver the next round of voting results. The next two contestants to advance were Katie Kadan (Team Legend) and Jake Hoot (Team Kelly).

After some deliberation, Daly announced two more artists who were advancing: Hello Sunday (Team Kelly) and Kat Hammock (Team Blake). They occupied the sixth and seventh spots of the top 8. This left Shane Q (Team Kelly), Joana Martinez (Team Gwen) and Marybeth Byrd (Team Legend) to compete for the final spot via instant save.

Who Was Eliminated During “The Voice” Season 17 Episode 22?

Joana Martinez and Shane Q were eliminated during tonight’s episode.

Shane Q was the first contestant to perform for the instant save, and he sang a cover of “Killing Me Softly” by Roberta Flack. He gave a solid performance, emotionally rich, and vocally strong, but it wasn’t as memorable as some of his previous instant save showcases.

Joana Martinez was the second contestant to sing tonight, and he opted to cover of “Somebody That I Used to Know” by Gotye. Martinez’s nerves seemed to have gotten the best of her during the first verse, where she was notably off-key. She straightened things out towards the end of the performance, but it wasn’t a very strong outing.

Marybeth Byrd was the last to perform for the instant save vote. She covers “You are the Reason” by Calum Scott. Marybeth gave the strongest performance out of the bottom three, with a striding confidence and a vocal range that carried her through the song’s tougher sections.

After the votes were tallied, Daly announced that Marybeth was the last performer to advance to the top 8. Joana Martinez and Shane Q were sent home as a result. 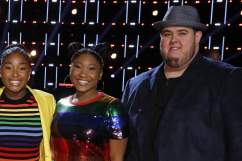 Read More
Reality TV, The Voice, TV
Find out which contestants will advance and which will be eliminated during the latest episode of 'The Voice.'