Chayce Beckham, winner of season 19 of ABC’s “American Idol,” celebrated a career milestone on February 22, 2022, when his music on Spotify reached over 1 million monthly listeners.

In August 2021, just a few months after his “American Idol” win, Beckham celebrated his debut single, “23,” hitting 5 million streams on Spotify. Now, that song has been played over 23 million times on the streaming service.

His most recent release, “Can’t Do Without Me,” which he released alongside country singer Lindsay Ell, has been streamed over 2 million times at the time of writing. 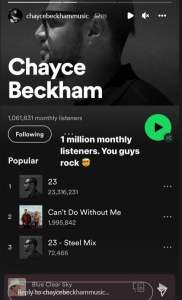 Beckham celebrated the milestone by sharing a screenshot on his Instagram story where his number of monthly listeners is 1,061,831.

Also in his Instagram Stories, Beckham shared a screenshot of the official music video he released on YouTube for “23,” which now has over 1 million views on the platform.

Beckham’s song previously got up to number one on iTunes and other streaming services following its release, according to Music Mayhem.

Beckham is Set to Join Jimmie Allen on Tour

Beckham is set to join Jimmie Allen, a Grammy-nominated artist who was named the 2021 CMA New Artist of the year as well as the ACM New Male Artist of the Year, on multiple tour dates. Allen is also a former “American Idol” contestant.

The tour will start in February and run throughout the summer. Allen has Beckham, Neon Union and Madeline Merlo on the tour alongside him, though Beckham is not at all dates since he is also set for his own tour at the time.

“‘Can’t Do Without Me’ is about everyday people, the people who complete them and how strong the urge is to be with them again,” Beckham told CMT. “The video for it captures that feeling perfectly as two people race down the road, eager to get to the spot where they can finally be together and feel all the feels they’ve been thinking about all day.”

Ell added, “That tension is definitely felt watching Chayce and I drive around, especially as we just barely keep missing each other on the road. After the car chase, the final chorus feels like the perfect payoff to finally see us in a performance scene together.”

Beckham told the outlet that he connects personally with the song to this day.

“I worked that 9-5, I drive that old car, and I know exactly how it feels to want to be with your significant other so bad that you hit the gas a little harder than you did on the way to work,” he told CMT. “I was just so excited to see that song go from the demo to where it is today. To watch it come to life, then hear it on the radio and now to see it as a music video (which is my first ever) is a really awesome thing.”