Taylor Ann Green and Shep Rose announced their split on July 20 but a recent photo posted to Olivia Flowers’ Instagram Stories confused “Southern Charm” fans as it showed Green and Rose hanging out together at The Wonderer in Charleston.

Flowers posted the photo on August 16 and the shot showed Rose sitting between Flowers and Green and she tagged the brand of their shoes. Rose shared Flowers’ Story to his own Instagram and added the caption, “I swear this is authentic laughter.”

The photo came after Green appeared on “Watch What Happens Live” and said the two exes were not in contact. However, Flowers told Page Six that she thinks the split may not be permanent. 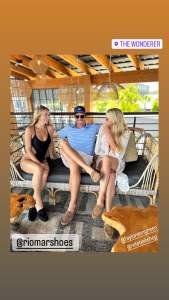 The post came as a surprise to fans as Green had just shared on “Watch What Happens Live” that she was no longer in contact with her ex-boyfriend after their July split, People wrote. She was asked if things were “amicable” and she replied that she wasn’t sure about having a friendship with the “Southern Charm” OG.

“He wants to be, but that’s having his cake and eating it too,” the season 8 newbie told Andy Cohen. “So, no, I’m not about that. Not for right now, at least.” However, after the Instagram Story began circulating showing the ex-couple together, People reported that they haven’t rekindled their relationship. “They have to work together so they are trying to make it comfortable for everyone,” a source told the publication. “It’s not romantic.”

However, Flowers told Page Six that she didn’t think it was a hard split but that they were in a gray area. “It’s still pretty much in that arena [of a break],” she said. “Nothing is permanent at this point. They’re both just taking the time to figure things out.”

Bravo fans shared their reactions to the photo in a Reddit thread on the topic, with one person pointing out, “It’s an ad so they probably had a contractual obligation to take this picture and post it.” Someone else replied, “Aren’t ads supposed to be tagged as such?” One person said, “Taylor posted a story too….calling it BTS at @riomarshoes. That’s why I call BULLS*** on the breakup being real….” Someone asked, “Why can’t Olivia post something with Shep if Taylor isn’t speaking to him?”

Quite a few people called out the look of the shoes, with someone writing, “Those shoes look so goofy with bathing suit!” Another said, “The only think I know for sure is that those shoes don’t go with a bathing suit.” One person commented, “It’s so awkward when one person is wearing a bathing suit in a group of fully clothed people.”

Many people ripped Rose, with someone calling him “so smarmy.” Another person wrote, “Taylor is such a babe and Shep is an effing idiot.” One person wrote, “I think Taylor has too much class to act obnoxious. She’s always so chill and a peace keeper, probably how she lasted this long with him.”

Loading more stories
wpDiscuz
0
0
Would love your thoughts, please comment.x
()
x
| Reply
Fans were surprised and confused after Shep Rose and Taylor Ann Green were spotted hanging out together after their split.