Talk about a reality TV match made in heaven!

Despite getting Katie Thurston’s final rose on“The Bachelorette,” Blake Moynes didn’t find lasting love on the ABC dating show. But now, he may have found a new “soulmate” – or at least a Bravo bestie!

In a clip reshared on his Instagram story, on February 10, Moynes was seen hanging out at the Valley Village, California home of former “Vanderpump Rules” stars Jax Taylor and Brittany Cartwright. As Cartwright opened a package from a company she works with, she found a long-stemmed red rose, which she presented to Moynes. When asked if he would “accept this rose,” Moynes cracked, “I’m sick of these things!”

Another photo showed Moynes and Taylor hanging out at what appeared to be a restaurant with the caption “Soulmates.”

While Moynes and Taylor may seem like an odd couple at first glance, they actually have a lot in common. The two share the same publicist and also share a passion for sports.

A rep for the duo told Heavy to the two “completely hit it off” and that Taylor “adores Blake.”

“They totally hit it off and will actually be watching the Super Bowl together,” the insider said. “Jax has been giving Blake a lot of tips on how to navigate this new world right now and they are also both hockey fanatics so it really was a match made in heaven.”

In addition to their hangout at Taylor’s home, the two friends recently posed for a photo with their publicist during a night out in West Hollywood, which can be seen here.

Blake Moynes Recently Opened Up About His Status With Katie Thurston 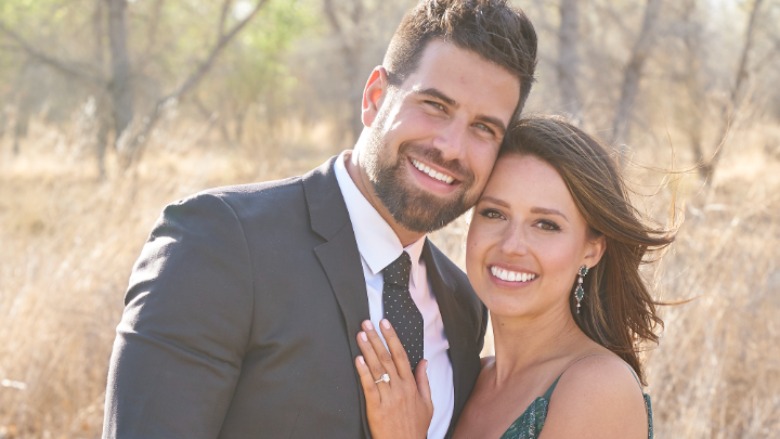 A new friendship is probably just what Moynes could use right about now. Less than a month after ending his engagement to Thurston in October 2021, he found out she was dating John Hersey, one of her previous “Bachelorette” suitors who she previously claimed was just a friend.

On the February 10, 2022 episode of Ben Higgins’ “Almost Famous” podcast, Moynes said he was still dealing with the breakup in his own way.

“I say, ‘I’m good,’ only because it’s been time,” the Canadian wildlife manager said. “Time heals a lot of things and time just allows you to kind of reflect and just move past the mayhem that’s happened.”

But Moynes added that after he found out Thurston was dating Hersey, he didn’t talk to her again.

“We talked very cordially after we announced the breakup, and we were really good with that. And then, obviously, all the other stuff happened. Since then, we have not spoke,” Moynes said, before noting that Thurston has reached out to him but he hasn’t felt ready to respond to her.

“There will be a time where I can respond,” he added. “But there’s no point in doing it where I’m going to speak out of emotion. … It didn’t play out the way I wanted it to, and it could have probably been handled different, but I have no time for a grudge.”

He added that he does plan to respond to Thurston eventually and that they “100 percent” will “make up” someday, but for now, the conversation is “sitting at the bottom” of his to-do list.

Loading more stories
wpDiscuz
0
0
Would love your thoughts, please comment.x
()
x
| Reply
The 'Bachelorette' alum has a bromance with a Bravo star.