Getty Mila Kunis (L) and Ashton Kutcher at the Zoe Saldana Walk Of Fame Star Ceremony on May 3, 2018 in Hollywood, California

Ashton Kutcher and Mila Kunis played boyfriend and girlfriend Michael Kelso and Jackie Burkhart on the TV sitcom That ‘70s Show, but today they are married with children.

The celebrity couple wed on July 4, 2015, and have two kids together.

Kunis once said that two was the perfect number of children for her and Ashton to handle.

“I will only have two,” she told People. “I have heard [moving from] two to three is the hard [jump]. [It’s hard] when they outnumber you. Right now, we’re fine. One hand, one hand. One eye, one eye. Two people, two kids.”

Here are five fast facts you need to know about Ashton, Mila, and the Kutcher kids.

The couple’s first child was born on Oct. 1, 2014.  During an appearance on the Ellen DeGeneres Show, Kunis said her daughter was “a really good baby” – and really big!

“She was 9.5 pounds when she was born,” Kunis revealed, according to E! News. “Because she was so big, she was like a hearty little thing; we skipped the newborn stage. …Newborn never happened. Newborn diapers never happened. And newborn clothes never happened.”

Not only was Wyatt big, but she was also bright from the start.

“My daughter is like two and a half, she speaks three languages, she’s got like Russian and Spanish and English. She actually understands and speaks them,” Kutcher told The Tonight Show, per Closer Weekly. 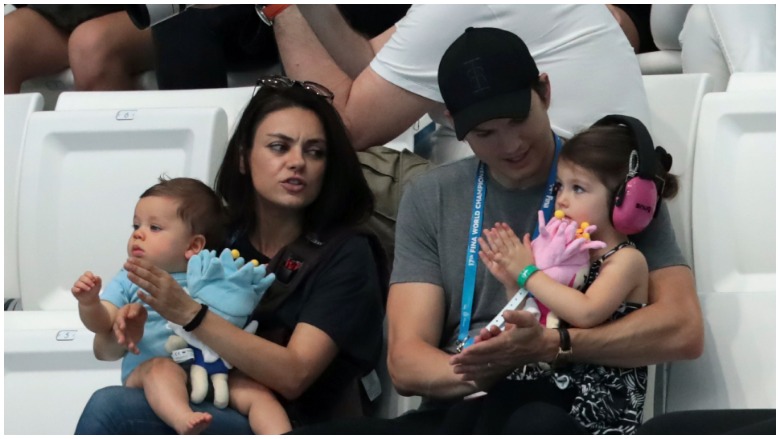 GettyAshton Kutcher and his wife Mila Kunis attend the diving competition at the 2017 FINA World Championships in Budapest, on July 17, 2017.

During their appearance on DeGeneres’ show, the talk show host joked that little Dimitri was a “young boy who never walks” – a jab at dad Ashton’s penchant for carrying his then 2-year-old son on his back and shoulders.

The Ranch actor revealed he bought a hiking backpack so the family can go for walks and to the beach, otherwise  “it’s a whole wrangling session with the kid.”

Now that Dimitri is a little older, he’s on foot.

The couple likes to have fun in their parental role.

“We’re very goofy parents when it comes to our children, but that doesn’t [mean we] have skill,” Kunis said on the Teach Me Something New podcast, per E! News. “I think that’s just [us] being idiots. We’re very comfortable with ourselves acting a fool at home, but maybe that comes from the idea of being comfortable in your own body, and in your own skin, and in your mind and not having a fear of making a fool of yourself.”

Kutcher admitted something the goofiness didn’t always fly with their young kids.

“Sometimes I try to read our daughter’s books in the characters’ voices, and she’s like, ‘Dad, can you just use your real voice?’” Kutcher said during the podcast. “I’ll do Peppa Pig with an English accent. And then [the dad], the whole thing. And she’s like, ‘Dad, just do your regular voice.’”

4. The Kutcher Kids Are Total Opposites

“They’re incredibly different,” the mom of two said, per Us Weekly. “My boy’s like a sloth. He’s wonderful, and I love him … One day he’ll probably watch this and be like, ‘Why did you say that?’ … But the truth is, women are smarter than [men]. And I have this evident from the two different humans that I created.”

“Girls are just like on it and boys are like, dum da-dum,” the mom of two continued. “They’re more like little linebackers going through life and like Neanderthal-ish. So there’s an element where Wyatt will be like, ‘Pass the cup please.’ My boy’s like, ‘Eh, eh.’ That’s it! That’s all you get …  There’s just a huge difference.”

5. The Wealthy Celebrity Couple Has Vowed Not to Leave Their Kids Any Trust Fund Money

The couple has been vocal about their family’s privileged lifestyle and once said they stopped giving their children Christmas presents because they felt it was “too much” and that the kids didn’t appreciate it all, according to Pop Sugar.

“My kids are living a really privileged life, and they don’t even know it,” Kutcher told Dax Shepard’s Armchair Expert podcast. “I’m not setting up a trust for them. We’ll end up giving our money away to charity and to various things. ..If my kids want to start a business, and they have a good business plan, I’ll invest in it. But they’re not getting trusts.”

Loading more stories
wpDiscuz
0
0
Would love your thoughts, please comment.x
()
x
| Reply
Here's what you need to know about the 'That '70s Show' stars' family.