Sony/Naughty Dog’s former orange platforming icon has returned to the public eye thanks to the efforts of Activision.

The positive response garnered from the Crash Bandicoot N. Sane Trilogy and Crash Team Racing Nitro-Fueled remakes are due in part to that resurgence. Crash’s fellow platforming contemporary Spyro the Dragon also got the remake treatment with the release of the Spyro Reignited Trilogy. That quality arrangement of three classic games owes its development to Toys for Bob, a studio that knows the spunky purple dragon all too well. Toys for Bob’s next game will keep the studio in the platforming space, but this time it’ll apply its expertise to good old Crash. And by the looks of that upcoming project, it’s setting itself up as a return to form and also an evolution of Crash’s traditional gameplay.

Here’s everything there is to know about the anticipated launch of Crash Bandicoot 4: It’s About Time. 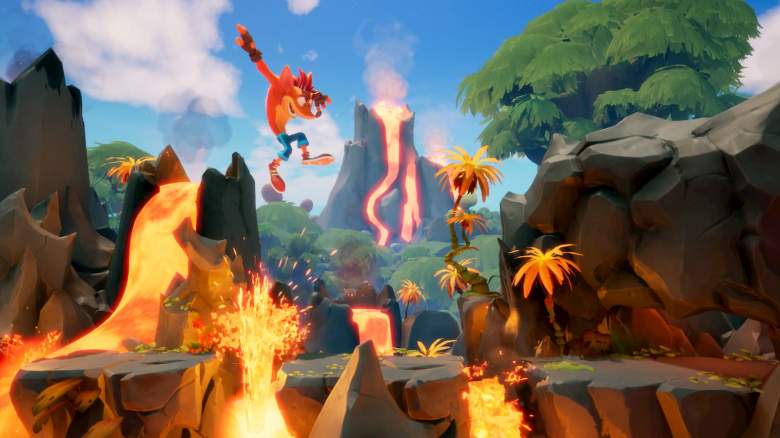 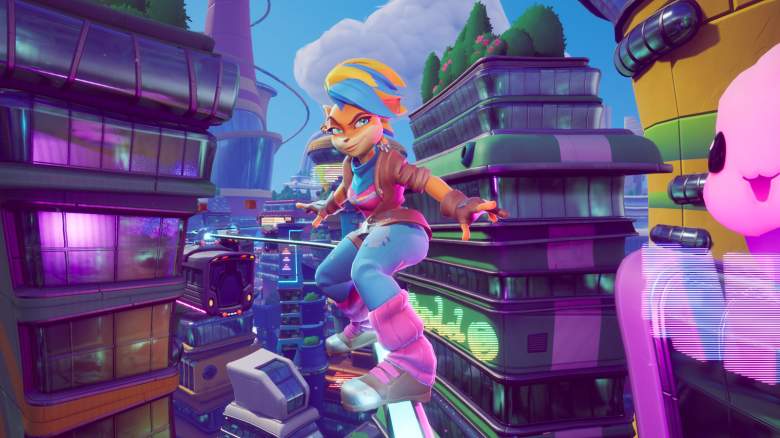 For anyone who digitally pre-ordered Crash Bandicoot 4: It’s About Time, you can look forward to accessing the demo on September 16, 2020. 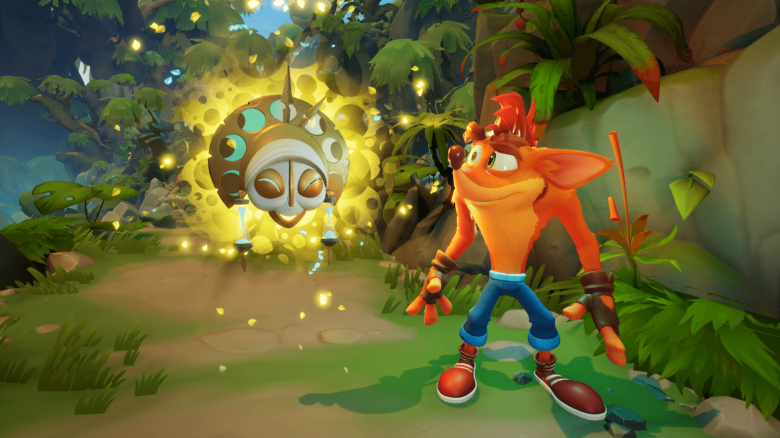 Crash’s upcoming adventure takes place directly after the events of Crash Bandicoot: Warped, the third game in Naughty Dog’s original PlayStation trilogy. Decades into the future, the evil trio of Dr. Neo Cortex, Dr. Nefarious Trophy, and Uka Uka find a way to escape the confines of their interdimensional imprisonment. After creating a massive rip in the fabric of time, they end up exposing a multiverse. Franchise heroes Crash, his sister Coco, and their wooden mask/spiritual guide Aku Aku step up to the plate to right their wrongs by teaming up with four Quantum Masks – Kupuna-Wa (Time Mask), Ika Ika (Gravity Mask), Lani-Loli (Phase Mask), and ‘Akano. 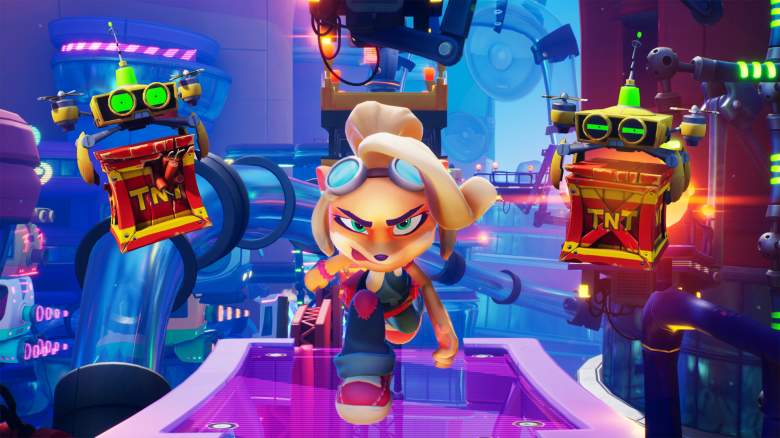 As expected, Crash and Coco will make their return to the classic platforming styling of past games in this upcoming sequel. As far as new playable characters go, one of those additions will be Dr. Neo Cortex himself. Dr. Cortex’s gameplay stands apart from that of Crash/Coco and sees the maniacal scientist use his ray gun to “blockify” moving targets into platforms that can float in midair and bounce pads. Dr. Cortex also has the ability to boost through the air in order to push himself further towards the platforms he creates. 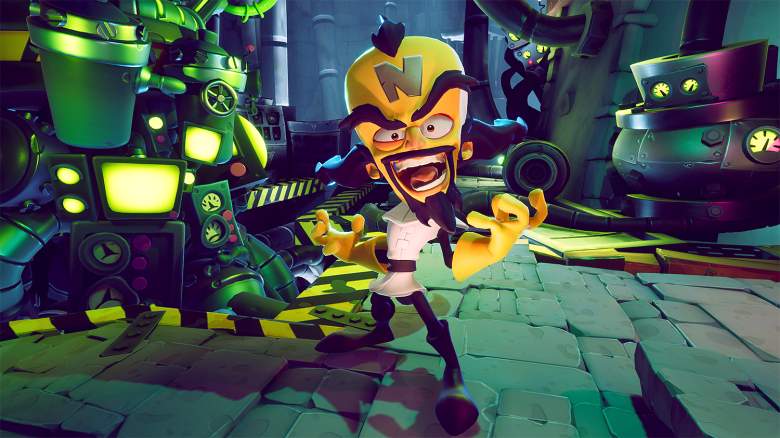 Another playable character players can look forward to using is a past Crash enemy, Dingodile. Dingodile ends up ditching his evil ways and decides to live a regular life as a diner operator. But things quickly fall apart for the big guy once his establishment is destroyed and leads to him getting sucked into another dimension. Dingodile relies on his vacuum gun to hover in the air and suck up TNT crates so he can send them back at his foes. That’s not his only form of attack, however – Dingodile can also utilize his powerful crocodile tail to swat the opposition. 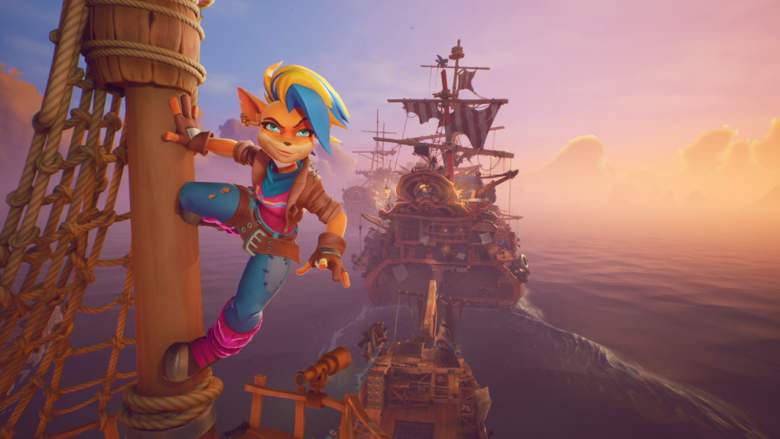 The final playable character you can look forward to using in Crash 4 is Tawna. Back in the very first game, Tawna played the part of the damsel in distress who needed saving after being kidnapped by Dr. Neo Cortex. This game’s version of Tawna comes from her very own alternate dimension (the aptly named “Tawnaverse”), where she plays the part of the main heroine. Her levels allow her to utilize a grappling hook-shot tool to swing to and fro, plus she hands out plenty of punishment with her spinning kick attack. Tawna also has the ability to use a ground-pound attack and wall jump maneuver. 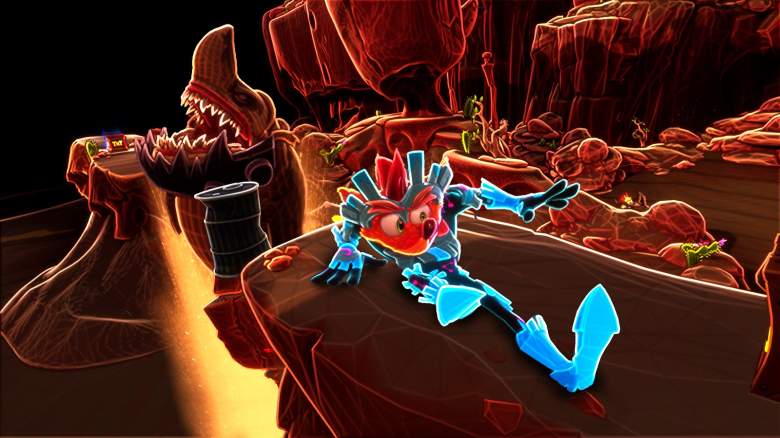 Crash Bandicoot 4: It’s About Time has made it clear that it will not employ the practice of microtransactions in order to sell costumes. The game’s huge lineup of alternate outfits for Crash and Coco can be obtained simply by completing in-game challenges and earning gems. Some of the costumes that have been revealed thus far include Crash’s biker jacket from Crash Bandicoot: Warped, a chicken getup, a pirate uniform, ninja attire, neon-colored club attire, and so much more. Coco can also get adorned in some unique costumes, such as a unicorn outfit, punk rocker gear, military commander duds, etc. Each character can wear their alternate costumes during every level they’re playable in. 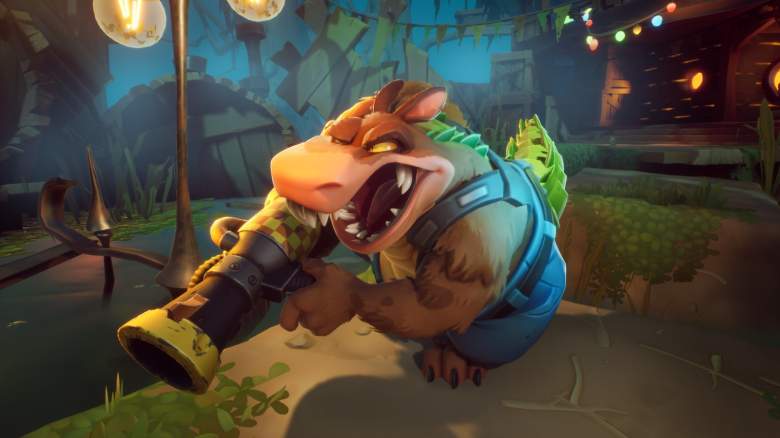 Thie brand new Crash Bandicoot experience features the type of gameplay that the first three releases were known for – front-facing camera levels, side-scrolling challenges, and chase sequences that see Crash/Coco try to stay ahead of a massive creature that’s on their tail. Crash and Coco can even run along walls now! And as mentioned beforehand, Dr. Neo Cortex and Dingodile deviate from Crash/Coco’s gameplay entirely. Players have the ability to tackle each level with unlimited tries (Modern Mode) or tackle it the classic way by utilizing a limited amount of lives to do so (Retro Mode). 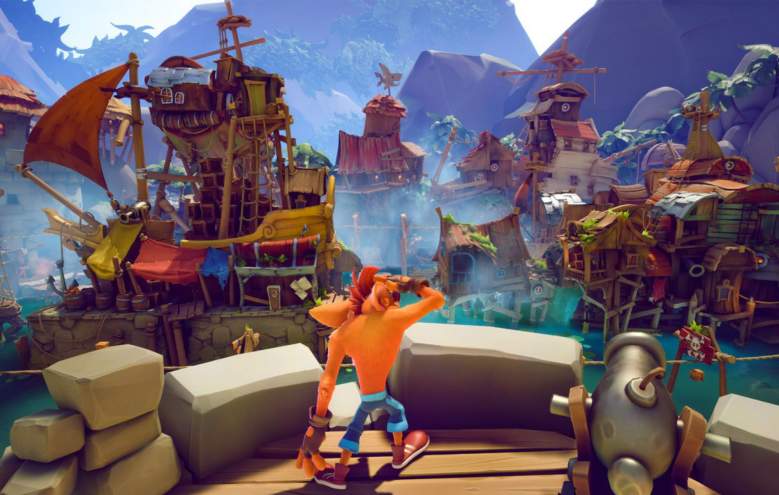 The coolest part of Crash 4’s gameplay is how it pushes players to utilize the abilities of the Quantum Masks they acquire over time. The Kupuna-Wa mask allows you to slow down time on everything except for the character you’re currently using. This mechanic can even be applied to how you choose to avoid instant death via green Nitro Crates – activating your mask’s slow-motion abilities lets Crash/Coco jump on those green crates and now be able to hop off of them before they wipe either character out.

The Lani-Loli mask lets Crash/Coco phase-shift numerous objects, platforms, and crates into/out of existence, while the Ika Ika mask lets both characters use the power of gravity to change directions by running across the bottom and top of the floor. And finally, the ‘Akano mask lets Crash/Coco spin continuously like a tornado in the air, pull off a double jump in mid-spin, and bounce projectiles back at their enemies. 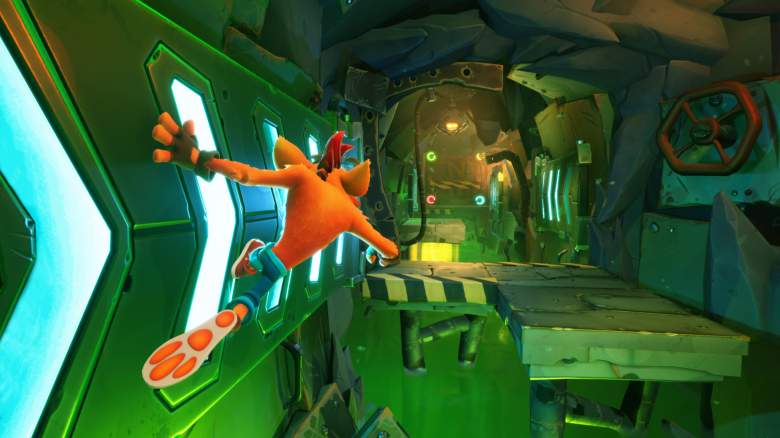 Thanks to a pretty cool partnership between development studios Toys for Bob and Beenox, Crash 4 will introduce a brand new type of unlockable mirror mode. The game’s N. Verted levels place players in a whole other dimension that changes up their visual aesthetics and offers up unique gameplay challenges to overcome. Some of those changes include levels that challenge players to spread paint across a color-deprived world in order to mark their path forward and levels that move at the breakneck pace of an old-timey film reel. Completing these types of stages goes a long way towards earning the gems needed to unlock more character skins. 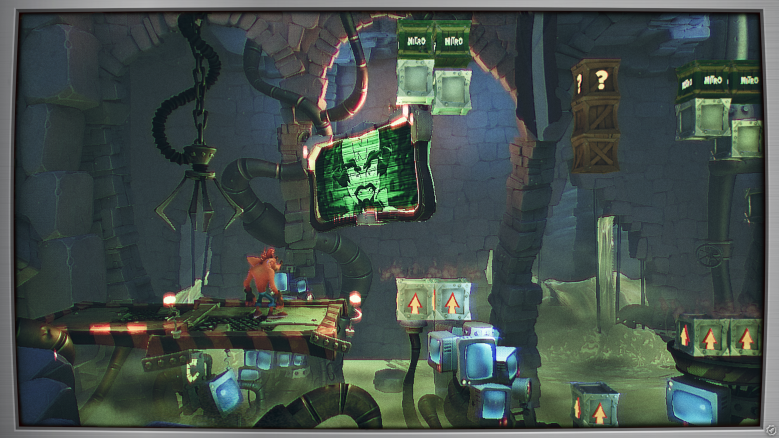 A slew of extremely tough Flashback levels provides an extra challenge for Crash and his sister Coco. These stages explore the origins of both bandicoots as they showcase the extreme training regimen they both had to endure within Dr. Neo Cortex’s Test Chambers. These levels transport players back to the 90s and serve as a prequel to the very first Crash Bandicoot game. In order to unlock these stages, players will have to collect Flashback Tapes within Flashback levels. And the only way to do that is by reaching the point where those tapes are located without dying during a Flashback stage run.

Crash 4 will play host to three cooperative and competitive local multiplayer modes – Checkpoint Race, Crate Combo, and Pass N. Play. Checkpoint Race pits up to four players against each other in a checkpoint-based challenge within a single stage. The player that reaches a checkpoint faster than their opponent(s) wins that checkpoint. Whoever has the most claimed checkpoints by the end of their stage run wins.

Crate Combo challenges each player to score as many points as they can by smashing crates. Each crate a player breaks increases their score value and combo counter, which they must maintain by keeping their meter full. The challenge comes to a close once a player reaches a checkpoint or dies. And finally, Pass N. Play acts as Crash 4’s cooperative mode. Up to four players can switch active control of the game amongst each other during the level playthroughs contained within the standard and N. Verted versions. 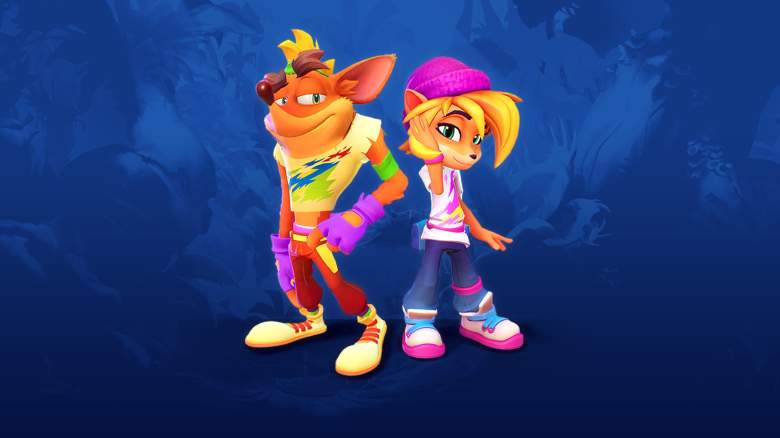 Crash Bandicoot 4: It’s About Time is available for pre-order (right here) physically and digitally. The digital pre-order bonus comes in the form of the Totally Tubular Skins pack, which gives Crash and Coco some slick throwback gear adorn themselves in. PlayStation 4 digital pre-order recipients will get those costumes alongside the ones available in the Marsupus Erectus Skins and Serious Upgrade Skins packs.

Check out our review for Crash Bandicoot 4: It’s About Time right here.