Much has changed in the world since Nick Foles was last at the Philadelphia Eagles. One thing that remains the same is that Foles is backed up and supported by the love of his life, Tori Moore. Foles and Moore’s relationship goes all the way back to when the pair were student athletes at the University of Arizona. Perhaps it was fate, as Foles flirted with Arizona State and Michigan State before transferring to become a wildcat. While Foles was a star on the football field, Moore was on the school’s volleyball team. Speaking to NJ.com in 2014, just after their wedding, Foles said Moore is “an athlete as well, so she knows how it goes. She pushes to make me better.”

The Arizona Daily Star reported in July 2016 that Moore and Foles had donated $250,000 to their alma-mater. The couple said in a statement at the time, “The University of Arizona and the athletics department mean so much to Tori and I. We had such a tremendous experience and our time there prepared us well for the future. We decided this project was the perfect opportunity to show our appreciation. We know this will have a positive impact on all the current and future Wildcats and we’re happy to join forces with everyone who is supporting the new academics center.”

Moore, a native of California stands at 5’10 and played volleyball for the University of Arizona from 2009 until 2011 when she met Foles who was playing quarterback for the Arizona Wildcats at the same time.

After graduation from the University of Arizona, Moore went to work for Nike. In a blog post, Moore wrote that in 2013 she was diagnosed with Postural Orthostatic Tachycardia Syndrome which would in turn result in a diagnosis of Lyme Disease. Moore writes that the illness “has been a journey of faith, hope, and trust in the process that God has set out for me.”

3. Moore Gave Birth to the Couple’s First Child in June 2017

Moore wrote on her Instagram page that she gave birth the couple’s first child, a girl named Lily, on June 16, 2017. Moore wrote, “What an incredible week it has been.” The post was accompanied by the hashtag, “sheisherfatherstwin.”

The couple are both religious, Foles has spoken publicly about his Christianity in the past saying, “I’m a Christian and I believe in God… and when you do great, you stay humble and you give Him glory.”

Foles sporting the rubber wedding ring that Matt Barkley does so he can practice in it. (Via @Eagles) pic.twitter.com/tO1vmnkSVO

As seen in the tweet, Foles began wearing a rubber wedding ring right after he got married so that he could wear it in practice, however it is not allowed to be worn during games. Matt Barkley who also plays the quarterback position for the Eagles wears one also.

5. Her Brother Used to Be a Tight End in the NFL

One of Moore’s brother, Evan Moore used to be a tight end for the Green Bay Packer, New Orleans Saints and Cleveland Browns, but has retired since. Evan was with the Eagles for a brief period at the same time as his future brother-in-law.

Ironically, Evan Moore also married a former college volleyball star in the shape of Colby Lyman, a former star with UCLA. While at Stamford, Evan Moore played for the school’s basketball team.

Moore other brother, Ryan, never went professional but he did play basketball while at UC-Davis. 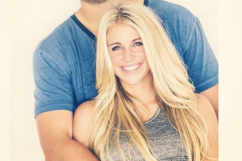