Getty A man points at a computer screen in Seoul on February 16, 2011 showing a man believed to be Kim Jong-Chul at an Eric Clapton concert.

Many people are familiar with Kim Jong Un’s brother who was assassinated with poison in 2017: Kim Jong Nam. But not as many people know that Kim Jong Un actually has another brother named Kim Jong Chul (sometimes spelled Kim Jong Chol.) He stays mostly out of the spotlight, preferring to play in a band and attend concerts. Read on to learn more about Kim Jong Chul and see photos of him.

GettyNorth Korean leader Kim Jong-un (C) walks along the Jubilee bridge during a tour of some of the sights on June 11, 2018 in Singapore.

Kim Jong Un has three living siblings who stay mostly out of the spotlight. Kim Jong Chul was born in 1981 to Kim Jong Il and Ko Yong Hui (also Kim Jon Un’s mother.) It’s not known how close the two brothers are, or if they’re close at all.

Kim Jong Un’s sister, Kim Yo Jung, is believed to be 28 or 30 and one of Kim Jong Un’s close confidantes, Fox News reported. Her mom is also Ko Yong Hui. In October she was elected as an alternate member to a top decision-making group in North Korea called the politburo. She and Kim Jong Un studied in Bern, Switzerland together for two years.

Kim Jong Un’s oldest sister, Kim Sol-song, is a more mysterious figure, Fox News reported. She also served in the Propaganda and Agitation Department, like her sister, and was Kim Jong Il’s secretary.

2. Kim Jong Chul Was Once Considered the Heir Who Would Follow Kim Jong Il, But His Dad Thought He Was Too ‘Effiminate’

Before Kim Jong Il died, many people believed that Kim Jong Chul would be the new leader of North Korea, taking over in his father’s place. At first, Kim Jong Il’s oldest son, Kim Jong Nam, was considered the heir apparent. In 1998, he was appointed to a senior position in North Korea that would secure that succession. But in May 2001, he was arrested in Japan and found to be traveling with a forged passport under the alias Pang Xiong. He was detained and deported to China. He said he had been planning to visit Tokyo Disneyland. His father canceled a trip to China with his son out of embarrassment; news stories either suggested that Jong-Nam was an immature heir or focused on the Louis Vuitton bags his female companions had, suggesting he was a symbol of extravagant living, GQ reported. His temporary exile eventually turned permanent.

At that point, all eyes turned to Kim Jong Chul. He had Army backing which made him a serious contender, many believed. But instead, he was passed over in favor of his younger brother, Kim Jong Un. Kenji Fujimoto, Kim Jon Il’s personal sushi chef, wrote in his memoir that Kim Jong Il thought Jong Chul was too much “like a little girl” or “too effeminate” to be in that position, and so he favored Jong Un. The Globe and Mail reported that Fujimoto said: “The older brother, Jong-chul, had the warm heart of a girl… The younger prince, Jong-un, was a boy of inner strength.”

Dr. Leonid Petrov, an expert on the North Korea family, said there were rumors that Chul had taken hormones to try to be more masculine, News.com.au reported.

3. He Plays Guitar & Is a Fan of Eric Clapton

Kim Jong Chul has a musical side and is sometimes considered the “softer” member of the family. He plays guitar and is apparently a fan of Eric Clapton, having been seen at multiple Clapton concerts over the years. On February 14, 2011, he was seen attending an Eric Clapton concert, and was again spotted at two concerts in London in May 2015. While there, he stayed at the Chelsea Harbour Hotel, which can cost more than $3,500 a night, Yonhap reported.

Yup, that was him. #KimJongChul back again for #Clapton @ Albert Hall. & a Japanese news media army in wait pic.twitter.com/jfM7Y57SKY

According to The Washington Post, when Chul attended the Clapton concerts, he looked like a rock star too, wearing a black leather jacket and shades. When seen in Singapore in 2006, he had pierced ears.

A Wikileaks release revealed that in 2007, North Korea wanted Eric Clapton to perform there because Chul was such a big fan. The cable was from the U.S. ambassador to Seoul, stating that North Korean officials had suggested a concert as an act of goodwill. In 2008, Clapton agreed “in principle” to the idea of performing in North Korea in 2009. However, Clapton later denied that he had agreed to that.

4. Jong Chul’s Role in the Government Centers Mostly on Helping His Sister

Kim Jong Chul stays out of the spotlight so much that his current role in the government isn’t widely known. He mostly helps his sister, Kim Sol-song, who plays a leadership role in the government, Petrov told News.com.au. “Chul assists his sister who is a much more controlling person and runs things when Un is busy. Korea is a very traditional society and while she is revolutionary bloodline and legitimate, she probably wouldn’t rule either.”

Wen Wei Po reported that Kim Jong Chul personally led the arrest of Jang Song Thaek, his uncle. In 2013, Jang was accused of being a counter-revolutionary and expelled from the Worker’s Party of Korea. His image was even digitally removed from group photos with other North Korean leaders. On December 13, 2013, North Korea announced that he was executed.

But Thae Yong-ho, North Korea’s former deputy ambassador in London, said that Jong Chul wasn’t interested in politics and preferred to play guitar in a band.

5. He Wrote a Poem As a Child, Saying He Preferred a World Without Weapons

In the book “Bipolar Orders: The Two Koreas Since 1989,” Hyung Gu Lynn said that Kim Jong Chul had written a poem as a child expressing his wish for a world without weapons. He was studying in Switzerland at the time, The Washington Post reported, and said his ideal world would have no weapons or atom bombs, and people would be free. He also expressed an interest in meeting Jean-Claude van Damme in the same poem. Some have hypothesized that Kim Jong Il’s statement about his son being too much like a girl might have been related to his son’s desire to have a world without weapons, but it’s not known if this is accurate or not. 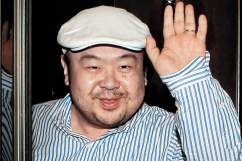