This video of a young man finding his way into an improv class audition surfaced on Reddit’s front page today, opening a discussion to, When does comedy cross the line?

YouTube-user yearmankind shared this video of him happening into an improv class audition while waiting for a ride at a community college.

After entry level improv class stuff, yearmankind was brought onto stage with two other auditioners for a classic game of “sit, stand, lean”, an improv game where three people participating in a scene each have to be either sitting, standing, or leaning—no two can share the same posture. The game took place during a scene about a high school reunion.

Yearmankind recounts his story on his Tumblr:

The guy who “didn’t belong at the reunion” in the scene we were playing, called me something that I did not take lightly. He called me “9/11 beard”. At first it took me a moment for it to sink in, but then I realized, he just associated me with a terrorist attack, the most devastating in recent history. What followed was that I lost my cool (rightfully so), and left the room.

You can watch yearmankind’s epic freak out in the video above. He becomes even more upset after the improv audition class informs him they are shutting down the audition because of the incident, yet carry on the class after they believe he’s left. He comes and confronts them again.

What do you think? Funny or not?

Most on Reddit think yearmankind needs to take a chill pill.

People who are easily offended should definitely pursue an improv comedy career. 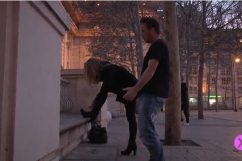 Read More
9/11, Reddit, September 11, Terrorism, Tumblr, Youtube
A YouTube-user's video of him losing it over being called "9/11 beard" in a comedy class audition at a community college caused a Reddit discussion.