Christmas is creeping ever closer, and you’re still not done shopping. That might be terrifying and stressful to you, but don’t worry! Perhaps you’ve run out of unique Christmas gift ideas, or maybe that person in your life has plenty of stuff already and you have no idea what to get them. Whatever the reason, calm down. It’s okay, and we’re here to help.

Here are 10 cool, unique gifts that men — from dads to husbands to brothers to sons — and even some women are sure to love.

1. The Lands of Ice and Fire

Who isn’t a fan of Game of Thrones at this point? Whether you watch the show, read the books or both, almost everyone is into George R. R. Martin’s fantasy series at this point. While waiting for The Winds of Winter or the fifth season to start up, how do you get your Westeros fix? Easy! Just get that man in your life The Lands of Ice and Fire. It’s a collection of detailed maps of the land of Westeros in full color. It’s beautiful and a must-have for any collector or diehard fan of the franchise.

Buy The Lands of Ice and Fire here.

You saw the trailer for Star Wars Episode VII: The Force Awakens, right? Course you did. Who hasn’t? I’m sure I’m not the only one stoked for another Star Wars flick (especially one without Lucas involved). Nurture your man’s overloaded hype levels with this beautiful 9-by-12-inch print of Boba Fett comprised of quotes from the movies and watch him remorse when he realizes the famous bounty hunter is still dead (at least as far as the movies are concerned).

3. What If?: Serious Scientific Answers to Absurd Hypothetical Questions

The creator of the famous xkcd web comic series started a What If? series not too long ago where he took the time to explain hypothetical questions readers sent him. Questions like, what height would humans reach if we kept growing through our whole development period at the same pace as we do during our first month? or, if every person on Earth aimed a laser pointer at the Moon at the same time, would it change color? These questions demand answers! Luckily, there’s a book full of answers you can buy right now to stimulate the mind of that hard-to-shop-for guy in your life. 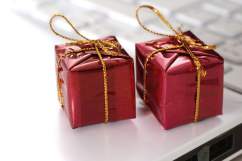 This is for the guy who likes to stand out. He’s going to Christmas and New Year’s parties, but all he’s got is an old blazer and some of those terrible 2015 sunglasses. If he expects to get any attention, he needs something different. That’s what these neon, light-up shades provide. The battery-powered accessory comes in a wide variety of colors and are sure to call attention to anyone who wears them.

Do you know a guy who has a hard time waking up in the morning? Does he sleep through his alarm clock after hitting that snooze button four times? Maybe this alarm clock is for him. When the alarm goes off, the clock jumps up to 3 feet in the air, hits the ground and starts rolling away, beeping like R2D2. If an annoying, mobile alarm clock doesn’t get someone jumping out of bed, I’m not sure anything will.

These powerful headphones might not utilize Bluetooth technology, but that doesn’t make them unworthy of your attention. This headset comes with a wireless transmitter that offers crystal-clear reception through walls and ceilings up to 300 feet, even out into yards. The transmitter acts as a charging dock, too, allowing one to charge the headset and give it free of annoying and limiting wires. Whether that guy in your life is using the Sennheiser headphones to listen to his TV or Hi-Fi Audio, it’s a convenient and affordable way to do it.

It’s sad to say that physical books are slowly going the way of the flip phone: They’ll always exist, somewhere, but that doesn’t mean they’re not outdated technology. As great as a physical book feels in one’s hands, it’s hard to beat the convenience of ebooks. One can hold literally thousands of them on a single Kindle, which is smaller and more lightweight than most books. And now that the Kindle is cheaper than ever, there’s no better time than now to grab one so that certain someone can actually follow through on their new year’s resolution to read more.

The future is now. This inexpensive device syncs with cars and sends the vehicle’s analytics and data to smart devices in real time. Using Automatic, it’s possible to learn how to make small changes in driving habits to save hundreds of dollars in gas, notify appropriate people in the event of a crash, diagnose why the “Check Engine” light is on, remember where the car is parked and so much more. At only $80, this is a great deal for new and older drivers alike.

Assassin’s Creed Unity is probably one of the worst games in the series to ever launch, but that doesn’t take away from this bundle’s value. Xbox Ones originally sold for $500, and then Microsoft took out the Kinect to sell the base console for $400. Well, now Amazon is selling Xbox Ones with two Assassin’s Creed games for only $350. Fundamentally, the One is every bit as powerful PS4, and you can’t beat this value. This has been one of the best-selling video game deals throughout the holidays, and it’s not hard to see why. 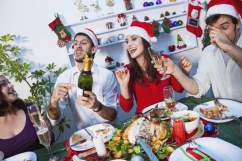 10 Best Christmas Gifts for Your Roommate

If you know someone who’s always listening to music, allow them to take their passion into the shower. This SoundBot is waterproof, which makes it to possible to sing one’s heart out while in the middle of a shower. It’s Bluetooth compatible, which it means it’s easy to sync devices to for up to six hours of continual play. Also, because it comes in a huge variety of colors, it’s easy to find a SoundBot that matches your favorite music-lover’s taste and style. 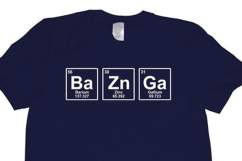 Read More
Christmas, Gift Guide, Gifts for Men, Shopping
If you're still searching for Christmas gift idea for those men in your life, look no further. We've gathered 10 unique Christmas gifts any man will love.