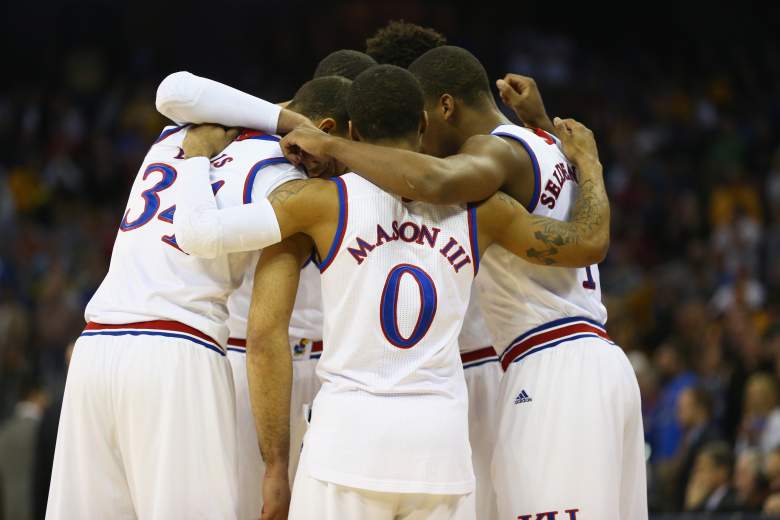 The Kansas basketball team is rising up the rankings after another strong performance last week. (Getty)

Welcome to 2016 and conference play, everybody!

If we’re being honest, we’re a little bit more excited for conference play than any sort of resolution we’ve made – or thought about making. Whatever, college basketball is more important and things are really starting to get fun now.

There are still a handful of undefeated teams in the country, but Michigan State is no longer one of them. The absence of Denzel Valentine is still hurting the Spartans and that means we’ve got a brand-new No. 1 squad in our Top 30. We’ve also got a brand-new No. 2. See, exciting!

Read on to check out the latest round of Heavy’s Top 30 teams in the country. Let’s all start mentally preparing for conference games. It’s only going to get more fun.

The Bearcats have stumbled a bit in the last week, dropping two of their last three. The Iowa State loss on December 22 was understandable. Or as understandable as losses can be. The loss to Temple on December 29? Not so much. Cincinnati needs to play more consistent defense and it needs to happen sooner rather than later.

The Commodores could not stop Ben Simmons. The LSU star racked up 36 points and 14 rebounds as Vanderbilt fell 90-82 on Saturday night. It’s the second loss in three games for Vanderbilt after last Tuesday night’s loss at Purdue. It doesn’t get any easier either with two road games this week.

Bad news, Zags fans. Przemek Karnowski is out. For the season. The consistently dominant big man missed the WSU game with back soreness and was officially declared out for the rest of 2016 after he underwent back surgery. He won’t be healthy for, at least, six to nine months and it’s a major hit to Gonzaga’s frontcourt. It’s also not the only injury the team is dealing with. Kyle Wiltjer and Domantas Sabonis are also nicked up.

Don’t look now, but the Flyers have won four straight. Dayton opened up league play with a 66-48 at Duquesne on Saturday night, but the squad’s recent performance is more than just that. Dayton notched an 85-81 OT win over Arkansas last Wednesday and one of the team’s two losses is to Xavier. If the Flyers can get some league momentum going, they could be a tournament threat again.

Iowa may have surprised more than a few people with Saturday night’s victory over Purdue, but there are plenty of reasons why the Hawkeyes are a real contender now that league play has started. The defense is on lockdown mode and, as a team, Iowa is averaging 6.2 blocks per game.