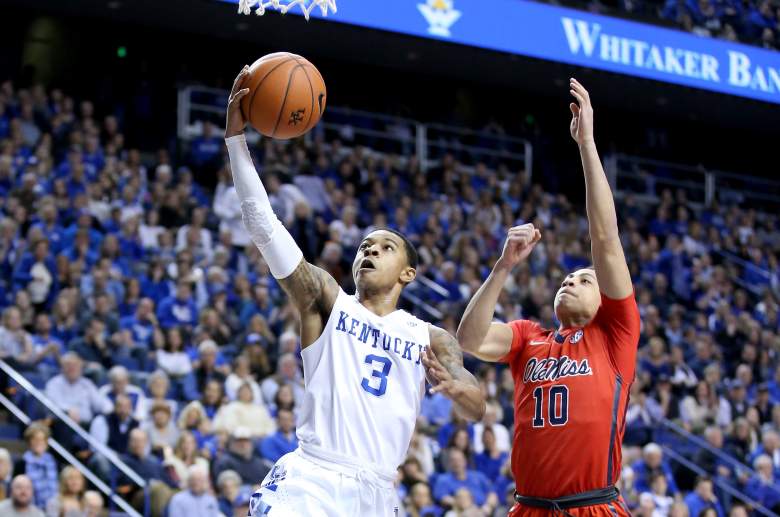 Tyler Ulis became the first UK player since John Wall in 2009 to score 20 points and dish 10 assists in a game last week. (Getty)

There’s nothing like a bit of inter-state rivalry to make you feel good about your team. Arizona cruised to a 94-82 victory over Arizona State on Sunday in both teams’ Pac-12 opener. Allonzo Trier scored 20 points, while Ryan Anderson chipped in 10 points and 10 rebounds. It’s another strong win for the Wildcats who haven’t lost since November. November.

Yes, Kentucky destroyed Ole Miss to start league play this weekend. But let’s not get too far ahead of ourselves quite yet. This SEC might not be a cakewalk for Kentucky this season. And this week presents a big test, particularly with Ben Simmons and LSU up next. Add into the mix a strong Texas A&M squad and still perfect South Carolina and, suddenly, this league is looking pretty darn deep.

Hey there, Joel Berry II. It’s nice to meet you. The sophomore scored a career-high 19 points and connected on the go-ahead 3-pointer with 5:07 left to lead UNC to an 86-78 victory over Georgia Tech on Saturday. Don’t expect Berry to be the star of this Tar Heels team, but watch out for him throughout league play. He gives UNC an added scoring threat in the backcourt and that alone is huge.

We really need to talk about Virginia more. The Cavaliers won their 11th straight game, defeating Notre Dame, on Saturday night and improved to 7-0 in ACC openers under Tony Bennett. That unexpectedly strong UVA offense continued tor roll, breaking the 70-point mark for the ninth time in 113 games. Oh, and did we mention Malcolm Brogdon notched his sixth 20-plus point game? Yeah, let’s talk more about Virginia.

Click that arrow in the corner to check out the top four teams in the country.