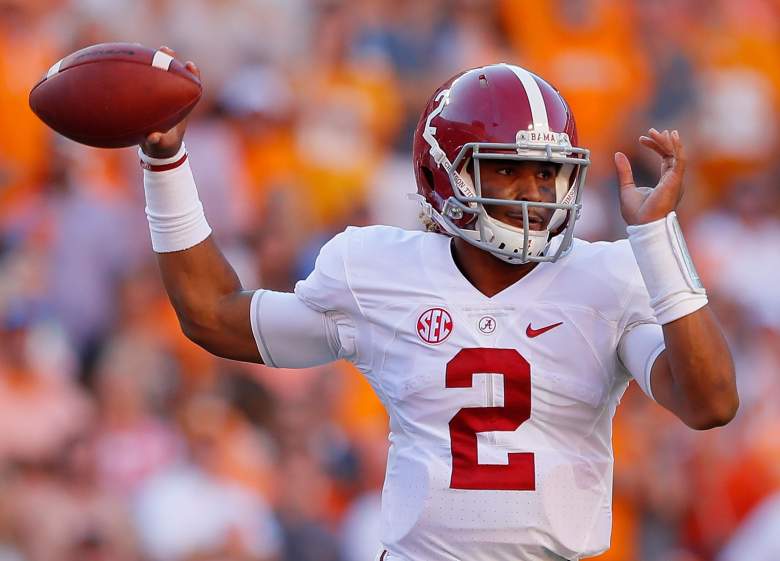 Jalen Hurts and Alabama are favored against Texas A&M. (Getty)

Alabama hosts Texas A&M on Saturday afternoon in a showdown of the two best teams in the SEC. According to OddsShark, Alabama is favored by 18 points heading into today’s contest.

The over-under is set at 58.5 points. The OddsShark computer likes Alabama to win but not by the margin Vegas expects. The computer projects a 37.6-21.4 Crimson Tide victory. The computer is taking Texas A&M against the spread and the over on the point total.

While it might be stretch to think the Aggies can pull off the upset, there is reason to like their chances of staying with Alabama. Daeshon Hall and Myles Garrett are two of the top defensive ends in the country. It will be the best pass rush the Crimson Tide have faced this season.

Texas A&M also has plenty of weapons on offense including receivers Josh Reynolds, Christian Kirk and Speedy Noil that make up one of the best units in the country. Alabama has no shortage of receivers of their own. ArDarius Stewart and Calvin Ridley are Alabama’s top receivers.

Freshman quarterback Jalen Hurts gives Alabama a dual-threat on offense that adds a different dimension to the Crimson Tide offense. Additionally, Alabama has one of the best scoring defenses in the country and will prove to be the edge in the contest.

Heavy likes Texas A&M to hang around with Alabama sealing the victory in the final minutes.