Getty Dallas Cowboys owner Jerry Jones signs autographs before the start of the NFL game against the Arizona Cardinals at the University of Phoenix Stadium on September 25, 2017 in Glendale, Arizona.

Dallas Cowboys owner Jerry Jones looked to make a statement alongside his team prior to a game on Monday Night Football on September 25.

Prior to the playing of the national anthem before the game against the Arizona Cardinals, Jones locked arms with Cowboys players and knelt as a sign of unity.

The Dallas Cowboys and team owner Jerry Jones #TakeAKnee BEFORE the anthem tonight. Some in the crowd still booed. pic.twitter.com/RZdq7gl4S9

The act was largely booed by the fans at University of Phoenix Stadium in Glendale, Arizona. It was in response to President Donald Trump, who said NFL players who take a knee during the national anthem should be “fired,” referring to them as “sons of b****es.”

Teams around the league had similar displays of protest in response to the attack. But the response orchestrated by the Cowboys organization took some by surprise. Jones is arguably the league’s most famous owner who built his over $5 billion net worth through an oil and gas exploration company, Jones Oil and Land Lease. He’s been spotted numerous times with New Jersey Governor Chris Christie, leading to speculation he’s a Republican and Trump supporter.

However, the longtime owner has been rather mum on his specific political beliefs and didn’t publicly endorse Trump or Hillary Clinton.

Here’s what you need to know about Jones’ thoughts on politics:

1. Jones Said He’s Against Kneeling During the Anthem But Wanted to Find a Good Way to Unite

After the game against the Cardinals, Jones stepped to the podium and fielded questions about the team kneeling. Jones said he and other Cowboys officials wanted to find a way to “respect” the American flag while showing unity and equality at the same time.

Jerry Jones: “We want to stand and respect the flag,” but Cowboys also want to emphasize unity & equality. Jones feels Cowboys did both.

Prior to the game and Trump’s comments, Jones attended a gala celebrating the 100th anniversary of Forbes magazine. He told Fox Business’ Cheryl Cason: “I do not think the place to express yourself in society is as we recognize the American flag. So that’s not the place to do anything other than honor the flag and everybody that’s given up a little bit for it.”

In August, Jones said he was very much opposed of not paying honor to the flag by doing anything else beside standing and saluting.

“I just feel so strongly that the act of recognizing the flag is a salute to our country and all of the people that have sacrificed so that we can have the liberties we have,” Jones said on 105.3 The Fan’s Shan and RJ. “I feel very strongly that everyone should save that moment for the recognition of the flag in a positive way, so I like the way the Cowboys do it.”

GettyJerry Jones is one of the most recognizable owners in sports.

Leading up to the 2016 presidential election, Jones refused to publicly endorse either Trump or Clinton. He said on his weekly radio show on 105.3 The Fan that endorsing a candidate would be bad for the Cowboys from a PR standpoint.

“I can’t afford to have any output there,” he said. “That just isn’t the way I do it there. The most important thing that I have is the Dallas Cowboys, and the fans that are there. I feel like I’ve got to get in here and do whatever I can do to keep our guys on the team so to speak, I’m talking about the fans.”

Jones admitted to personally knowing both Trump and Clinton and said he had “a lot of admiration” for both of them. He said he dealt with Trump decades ago when the now-president owned the New York Generals of the now-defunct United States Football League.

“My goodness, what would it be to have a woman as our first president and have it be Hillary,” he said. “I know both of them personally. I admired it when she got the nomination. And then I just cannot believe through his own unique way, Donald Trump has a shot to be President of the United States.” 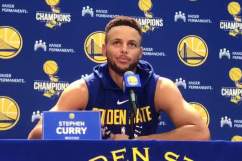 3. Jones Has Hosted Fundraisers for Chris Christie & Saw Him as a Good Luck Charm During the Playoffs

Jerry Jones and Chris Christie embrace each other as Cowboys advanceWith the Dallas Cowboys winning a playoff game for just the 2nd time in the past 18 seasons, owner Jerry Jones and New Jersey governor Chris Christie were more than a bit giddy. Subscribe: goo.gl/Nbabae Check out our full video catalog: goo.gl/9pMHRV Visit our playlists: goo.gl/NvpZFF Like SB Nation on Facebook: goo.gl/Pzcs7O Follow on Twitter:…2015-01-05T17:54:03.000Z

While Jones didn’t publicly endorse Trump or Clinton, he’s a known supporter of Christie. The New Jersey governor has been seen inside the Cowboys owner’s luxury box numerous times during games, even once embracing each other after a big play with a celebratory hug in 2014 (which can be viewed above. Even though he was born in Newark, Christie is a lifelong Cowboys fan.

Jones also referred to Christie as a good luck charm during the playoffs.

“He’s part of our mojo,” he said. “I want him there all the way. I’ll tell you, if he’s got enough mojo to pull this thing out, he ought to be looked at as president of the United States.”

But the friendship between the two didn’t stop there. Jones offered assistance to the Christie campaign as he tried to become the Republican nominee.

Christie is a known Cowboys fan and was the recipient of a fundraiser hosted by Jones in 2015 whne he was one of 15 Republican candidates vying for the nomination. According to the Dallas Morning News, the event was held at Jones’ $17 million mansion in Highland Park. 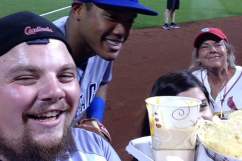 While Jones didn’t contribute to Trump’s campaign, he was one of over 12 percent of Texans to give a hefty sum of money to his January 20 inauguration. The inauguration ceremony in Washington D.C. came with a price tag of $106.7 million, and many corporations and executives from Texas gave toward the cost.

According to data provided by the Federal Elections Commission, Glenstone, a group directly tied to Jones, gave $1 million for the historical ceremony. AT&T, which is based in Dallas, gave $2.1 million while Exxon Mobil put forth $500,000.

5. Jones is Friends With George W. Bush & Bill Clinton & Hosted Them in His Luxury Box

When Hillary received the Democratic Party’s nomination for the presidential election, he talked about how delighted he was to be able to see her on the ballot on his radio show.

We were all so proud to hear and see the first woman of a major party nominated. The thing that I am impressed about is her grit and the fact that she’s endured — and boy has she certainly had a lot of life’s experiences right before all of our eyes. But you can’t help but admire her for being the first woman nominee. I think there’s been 100 (nominees) for the major parties, and she’s one of them.

I am, if anything — and not because it’s in vogue — but I have a daughter, and I know what the women in my life have contributed to it. And if anybody has thought that a woman could be and should be president of the United States and practiced in the support of that, I certainly would like to say that I have done that. I’ve always thought that they were very capable of leading this country and have told my daughter many, many times that she could be president of the United States.

Jones wasn’t just high on Hillary because of the nomination, it’s also because he has personal ties to the Clinton family that dates back to the 1990s. Jones was born in Los Angeles, California, but moved to North Little Rock, Arkansas when he was growing up. He attended the University of Arkansas and that’s where he started his successful oil business.

Of course, former President Bill Clinton and his family have deep ties to the southern state. Clinton was born in Arkansas and served as its governor for two terms.

While he served as president, the Cowboys and Jones visited the White House three times after winning Super Bowls.

“I was really touched,” Jones said after the ceremony. “It was just special to have President Bush here and Laura under the circumstances of their role in 9/11.”

In 2014 with the NCAA Final Four men’s basketball tournament making an appearance at the same stadium, George W. Bush was in Jones’ luxury box alongside Bill Clinton and the owner himself

Read More
Dallas Cowboys, Football, NFL
Jerry Jones joined the Cowboys in kneeling prior to the national anthem before a game against the Arizona Cardinals. What are his political beliefs?