Getty Is Leon Edwards next for Jorge Masvidal?

UFC welterweight title contender, Jorge Masvidal, is one of the most colorful characters the MMA promotion keeps on its ever-changing roster.

Masvidal has fought the who’s who of the division, collected highlight after highlight, and even campaigned for a “baddest mother f–ker” belt to be created. He would go on to convince the UFC to allow him and Nate Diaz to headline a historic card in New York City where the winner would be crowned the BMF champion.

Masvidal won via a controversial doctor stoppage and then offered Diaz a rematch.

“I told Nate right now … ‘Let’s run it right back,’” Masvidal said in the Octagon post-fight (h/t Yahoo! Sports) “We’re going to run it back, New York. So don’t worry about it. It’s going to happen again.”

That rematch has yet to come to fruition.

Although he’s on a bit of a losing streak as of late he remains one of the most popular fighters of the UFC’s modern era. His flamboyant personality translates into wild fights and even crazier post-fight interviews.

Masvidal currently resides in Southern Florida and wears his Cuban heritage proudly, often channeling the culture in his attire, his trash talk, and even his political leanings.

He’s no stranger to controversy having been linked to pro-Donald Trump views, questionable trash-talk, and controversial post-fight antics.

Here’s what you need to know about Jorge Masvidal: 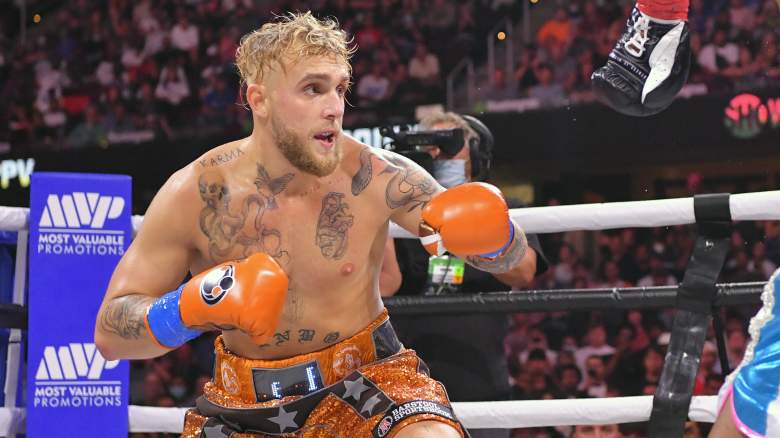 GettyJake Paul fights Tyron Woodley in their cruiserweight bout during a Showtime pay-per-view event at Rocket Mortgage Fieldhouse on August 29, 2021 in Cleveland, Ohio.

Everyone knows Jake Paul fights draw big paychecks for their opponents and Masvidal is no idiot. That’s why when he called out Paul during the broadcast of the Evander Holyfield vs. Vitor Belfort card, not many people were surprised.

“Since this fight [Holyfield vs. Belfort] is quick, I’m gonna plug in a quick commercial because I’m broke right now so I need some money,” Jorge said (h/t Sportskeeda). “I heard the Paul brothers… I could get a special deal on them, I’m beating them up if I come over here. So, UFC talk to Triller, Triller talk to UFC, let’s go.”

Masvidal was on site helping his friend, former President Donald Trump, act as color commentary for the fight.

Paul seemed into the fight and, knowing that Masvidal was still under contract with the UFC, offered a deal.

White was never going to agree to that.

“Masvidal’s 170 pounds,” White told the Daily Telegraph. “He likes 170-pounders. Go fight somebody your own size. Anderson Silva’s not under contract, he’s 46 years old – that’s the age group you love to fight – and he’s your size and he’s actually winning fights. If you look at Jake Paul’s history, Jake Paul either fights basketball players who have never fought or he wants to fight washed-up older guys who haven’t won fights in years. Anderson Silva has actually been boxing, he’s won some fights, he’s 46 years old, and he’s in your weight class. There you go. That’s a no-brainer. Fight Anderson Silva.”

Looks like Masvidal is out of luck on this one. 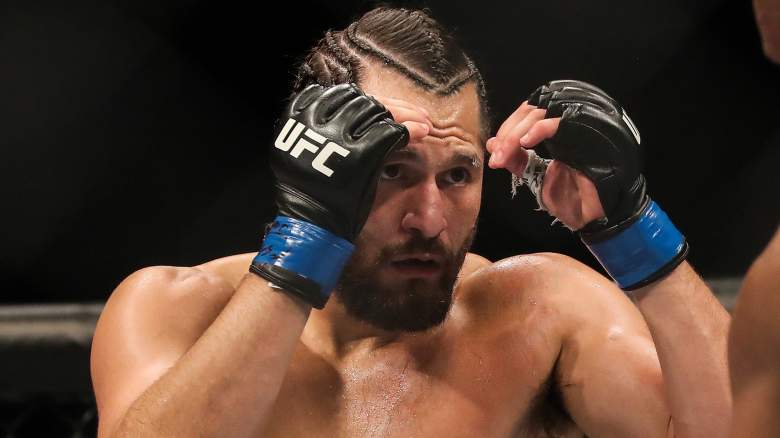 UFC fighter pay is a hot topic right now. Everyone from Jake Paul to Jared Cannonier and now Masvidal are discussing the low pay that professional UFC fighters are making.

“Fighters are very individual creatures,” Masvidal said on The MMA Hour. “We’d have to come together under a roof, or something like that, and have each other’s best interests at heart, so we could sit down with everybody together. And that, in itself, is a problem.”

Fighter pay is a tricky topic because not all the pay is disclosed. The Nevada State Athletic Commission stopped disclosing fighter’s purses in 2020, much to the dismay of the media. It’s also widely different depending on the fighter, the opponent, and the card. For example, Conor McGregor, who was named Forbes’ highest-paid athlete last year, makes most of his money in pay-per-view revenue and sponsorships while lower-level fighters are paid tens of thousands to fight, much of which goes to fight camp expenses.

According to the International Business Times, “In 2020, the average UFC fighter earned $147,965.” They would go on to say that only 219 fighters (less than 38 percent of the total athletes) make six figures.

The last disclosed pay for Masvidal was his fight with Kamaru Usman at UFC 251 where he made a reported $1,313,333. This number might sound good to some but the average NFL player makes more than $2 million, before sponsorships.

The UFC has long been scrutinized for the amount of money paid out to fighters versus the revenue, something Masvidal is all too familiar with.

“I think in the future, something will happen, but I don’t know,” he said. “I hope more people keep bringing attention to it, because I think it’s messed up. I think they just released again the percentages of [revenue going to athletes] for Bellator and other organizations, how much more they give. It’s crazy.”

3. Jorge Masvidal Made the Phrase “Three-Piece and a Soda” one of the most iconic UFC sayings in history

In 2019 Masvidal gave an interview that will go down in infamy.

Masvidal had just won his fight against Darren Till at UFC Fight Night 147 in London, England. He was backstage being interviewed when another fighter,  Leon Edwards, entered the same space. Words were exchanged and Masvidal charged at Edwards, landing significant strikes leaving Edwards bloodied. The whole thing was caught on multiple cameras and it was immediately the talk of the night.

Then Masvidal spoke with ESPN’s Brett Okamoto and the whole thing became iconic.

”You are what you are, you’re just a loser in life, man,” Masvidal said. “You’re not going to get a hit off on me. So I had to give him the three-piece with the soda and then just glide out of there, you know? And then some of his friends tried to sucker punch me, those guys did a big mistake.”

It’s that line, thre- piece with the soda, which has followed Masvidal ever since.

There were t-shirts made and the phrase is even in the Urban Dictionary thanks to Masvidal who continues to deliver one-liners to this day.

Edwards and Masvidal is still a fight fans want.

Masvidal’s support of former President Trump has been unwavering.

So much so that Masvidal threatened to leave social media after the President was banned from Twitter for “risk of further incitement of violence.” Masvidal tweeted, “Not too many places I ain’t been kicked out of and since all the cool kids have been kicked off Twitter … reversed hand with middle finger extended [Twitter founder] @jack Follow the leader. Ala din my way out of here.”

But Masvidal’s support doesn’t stop there.

The pair have tweeted support of each other, with Masvidal expressing his admiration for Trump, “My honor and duty to the country my father risked his life escaping to from the hands of communists,” he tweeted. “Said it before and I’ll say it again, you a BMF sir.”

Masvidal also went on tour with Donald Trump Jr. campaigning for Trump Sr. ahead of what would be a failed bid at a second term in office.

Masvidal has said many times that his support of Trump comes from his family’s history with the communist regime in Cuba.

It’s not uncommon for UFC fighters to support Trump, as White has credited Trump’s support of the UFC as one of the turning points for the promotion. Fellow fighters such as Colby Covington, Michael Chandler, and Aljamain Sterling have voiced pro-Trump sentiments over the years.

Trump was the first sitting President to sit cageside for a UFC, attending none other than Masvidal’s headline BMF title fight in New York City.

5. Masvidal Knew He Would Make Money Fighting When He Was Just 10 Years Old

Masvidal shot to stardom not for an exciting Octagon performance but for street fighting videos of him and Kimbo Slice.

“I was training in the same gym as Kimbo,” Masvidal said in a video he made shortly before UFC 244. “He got in contact with us and said ‘Hey wanna scrap? I was like hell yeah. I get the call, maybe like a week from that date.”

Those fights would launch Masvidal into the public and cement him as a true fighter, willing to fight anyone and anywhere.

His opponent, simply known as Ray, was a 200-pound monster and Masvidal picked him apart. From there Madvidal began booking fights for money under banners like Bodog Fight, AFC, and Bellator. He would ride a wave of stellar performances into the UFC where he quickly became one of the welterweight divisions most exciting fighters.

His long flowing hair, paired with his street fight experience led to fans coining him “Street Jesus” making memes about his fights and appearance.

“I am not too much online, so I don’t see these things until like this moment if somebody shows it to me,” he said in an interview with Cageside Press. “I am not Jesus in any way, shape, or form, and I want nobody to hate me because people doing these memes. I am baptizing people with these hands, but I am not God. Nothing like that.”

READ NEXT: Jorge Masvidal Comes Up With Fight for Conor McGregor [LOOK]

Loading more stories
wpDiscuz
0
0
Would love your thoughts, please comment.x
()
x
| Reply
UFC welterweight title contender, Jorge Masvidal, is one of the most colorful characters the MMA promotion keeps on its ever-changing roster.