Back in 2012, Anne Hathaway suffered a wardrobe malfunction and it was unfortunately caught by the paparazzi. The actress had just arrived at the Les Miserables premiere in New York City when the incident occurred.

Hathaway’s car pulled up to the Ziegfeld Theater and, as she was climbing out of the vehicle, it became evident that she hadn’t been wearing any underwear. The slit of her retro black dress must have shifted during the ride, making for one extremely awkward moment. It didn’t take long before the photo populated online.

You can see the uncensored version of Hathaway’s wardrobe malfunction here. Please be advised that the image is NSFW.

At the time, Hathaway was wearing a black bondage-inspired getup. You can see her complete look in the photo below.

After the incident, Hathaway was the talk of the internet. As many people discussed Hathaway’s choice to go commando, news outlets used the unfortunate moment to poke fun at the actress’ outfit, which many felt was a clear miss.

“Anne Hathaway shows her vagina to distract from her hideous outfit,” read a headline from Gawker the following morning.

Hathaway’s unfortunate moment was even brought up by Matt Lauer during an interview on Today. Hathaway sat down with Lauer to promote the film, but his introduction was fairly inappropriate and quite shocking.

“Anne Hathaway, good morning. Nice to see you. Seen a lot of you lately,” Lauer said to Hathaway.

“Sorry about that. I’d be happy to stay home,” she responded.

“Let’s just get it out of the way. You had a little wardrobe malfunction the other night. What’s the lesson learned from something like that, other than that you keep smiling, which you’ll always do,” Lauer pressed, bringing up the uncomfortable moment on live television.

“Well, it was obviously an unfortunate incident. It kind of made me sad on two accounts. One was that I was very sad that we live in an age when someone takes a picture of another person in a vulnerable moment, and rather than delete it and do the decent thing, sells it. And I’m sorry that we live in a culture that commodifies sexuality of unwilling participants, which brings us back to Les Mis, because that’s what the character [Fantine] is. She is someone who is forced to sell sex to benefit her child because she has nothing and there’s no social safety net so yeah — let’s get back to Les Mis,” Hathaway said, as confidently as she could.

You can watch part of Hathaway’s interview with Lauer in the video below.

Flash forward, to 2017, and this story is making the rounds again. Since Lauer was fired from Today this week, following claims that he acted inappropriately towards a woman on at least one occasion, people have been very interested in his interview with Hathaway and have been searching the web in an effort to find it.

“On Monday night, we received a detailed complaint from a colleague about inappropriate sexual behavior in the workplace by Matt Lauer,” NBC Chairman Andy Lack said in a statement on November 29, announcing that Lauer had been fired by the network. 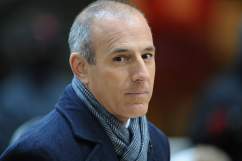 After His Firing, Looking Back at Matt Lauer’s 2012 Interview With Anne Hathaway