A reality show is fake? This is news?

The star of A&E’s “Storage Wars,” David Hester, is suing A&E for wrongful termination and in his complaint he claims that the entire show is faked.

For those unfamiliar with this TV gem, it follows some dudes who buy unpaid storage units to hopefully find something valuable to sell. Hester claims that after complaining to the production staff about the show being rigged, he was fired. He’s pissed, suing the network and exposing his version of the truth.

Hester’s complaint reveals that A&E would put profitable and rare items into storage units, or even stage entire storage units to create drama for the show. He also claims that interviews with cast members are scripted, and will film fake auctions to make it seem as though they are bidding on a unit. In addition, A&E will pay for weaker cast members’ bids to give them an advantage over more experienced bidders like Hester. And, Hester claims that the show gave cast members money for plastic surgery to make them more appealing. 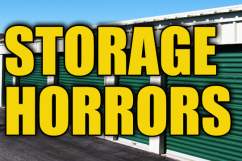 A&E has, in the past, refuted rumors that the show is faked, but new details are emerging that may make their denials harder to stand by.

Now, RadarOnline reports there is evidence to support Hester’s claims. According to their exclusive source, “producers asked some cast members to provide interesting items that were then planted in lockers and discovered on camera … the production company then paid them a “rental” fee for the on-camera usage of the items. This left a trail of emails, receipts and reimbursement checks.”