Anger Management co-star Selma Blair is getting fired … Well, Charlie Sheen hopes she is. Sources told TMZ that Blair has been complaining to producers that Sheen is constantly late to set and has a poor work ethic. As a result, Sheen has told executives he will go on strike if Blair is not fired.

Sheen says he fired the actress and REFUSES to shoot if she comes to set today.

The rumor is that Sheen is telling everyone he has actually fired Blair in hopes that it will actually happen.

On a side note, Sheen has told the network he wants Mila Kunis to join the cast for 10 episodes and be paid $1,000,000 dollars per show. If Blair gets the boot, maybe now will be the perfect opportunity for Sheen to snag Kunis. But, will execs go for it? 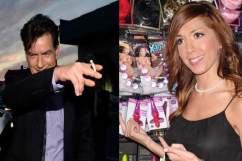