Kate Couric is ready to walk down the aisle as she gets engaged to fiancee John Molner over the holiday weekend. Check out the 5 Fast Facts on the engagement and their relationship below.

1. Katie Couric Has Confirmed the News

Yes it's true! So touched by all the kind Tweets & warm wishes-thank you! A great end to the summer & looking fwd to seeing you all Monday!!

The news is true! The woman of the hour confirms it herself on Twitter.

2. Molner Is a Modest Midwesterner … And Katie Loves it!

John Molner is a NYC-based financier, from Chicago who is a partner at investment firm Brown Brothers Harriman, so it looks like Couric isn’t the only successful one in the relationship. Apparently, Couric confessed to reporters last year that her man is “great” and she just “loves Midwesterners.”

The two lovebirds made their romance known just a little over a year ago.

A representative for the TV host confirmed to MailOnline that Mr Molner popped the question on a beach in East Hampton, New York, as the sun went down, with a ‘spectacular diamond ring’.

4. The Congratulatory Wishes Have Been Pouring In

Congrats to @katiecouric and John Molner on your engagement. Ali and I are thrilled for you.

Check out some the the kind words for Katie and her new fiancee.

. @katiecouric I just read the news! I'm sooo happy for you! Congrats on your engagement! Xox http://t.co/XWc5fCQXzw

5. This Will Be the Second Marriage for Katie

In 1998, Couric lost her first husband Jay Monahan to colon cancer. After fifteen years of being a widow, we think it’s about time Couric have true love. Because Couric and Monahan had two daughters together and they were very young when their father died, Couric confessed to Us Weekly:

I always wanted a father figure for my daughters [Ellie and Carrie], but it hasn’t worked out that way. I’ve had long-term relationships, but they haven’t turned into life-long partners.

It may be a little late in the game as Ellie is 22 and Carrie is 17, but better late than never, right? 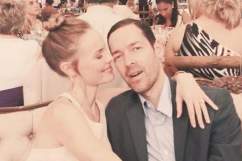