Cheyne Thomas is supposedly Miley Cyrus’ new man. But, they may have just a really intimate friendship … Read on for the facts on the possible couple’s relationship as well as their recent photos together, getting very friendly …

Cheyne Thomas is a big member of Miley’s entourage and is reportedly her assistant, according to TMZ. Could there be a little work mixed with pleasure situation going on here?

2. Miley Was Spotted Getting Intimate With Thomas in Vegas

@BangerzzTour okay so I can ship @MileyCyrus and @CheyneThomas? They would be a very cute couplepic.twitter.com/WPUoMPKVY3

Maybe Miley and Cheyne are just very, very friendly, but these pics look like there’s a little bit more going on between them than just friendship or just a work relationship. The two “BFFs” were photographed at Beacher’s Madhouse in Las Vegas after they attended Britney Spears’ show opening earlier that night.

And, just for fun, check out this photo of Miley at Britney’s Vegas debut in the below tweet:

if u told me I'd be front row & center on @britneyspears opening night 10 years ago I wouldve never believed youpic.twitter.com/L96rFXDI77

Miley and Cheyne’s fun at Beacher’s Madhouse seemed to heat up a lot as Cheyne got quite a handful of Miley while partying into the early hours of morning with her. But hey, some of us are very touchy-feely with our friends, right?

4. For Jingle Ball, Thomas Posed as Bad Santa at Each of Miley’s Performances

We all saw Miley partying and twerking on “Bad Santa’s” lap during her Jingle Ball performances. Well, the man behind the skeezy Santa suit was Cheyne Thomas. And, the duo had just as much fun on the stage as off, from the looks of these pics: 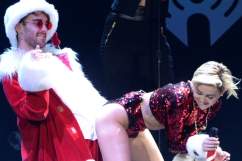 5. Thomas Isn’t the Only One Rumored to be Dating Miley

Sexy actor Kellan Lutz has recently been speculated to be Miley’s new man. He was even at Beacher’s Madhouse with Cheyne and Miley. However, there was no kind of PDA reported, unlike the immense amount shown between Miley and Cheyne … You be the judge.