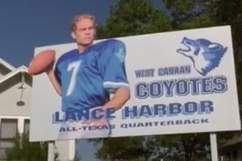 Fast and the Furious

I owe you a ten-second car.

Brian: Nice crib, sarge. It’s a lot better than that last place you confiscated.
Sgt. Tanner: Eddie Fisher built it for Elizabeth Taylor back in the fifties.
Brian: See? Even the cops in Hollywood are Hollywood.

Agent Sophie Trinh: So which car do you want?
Brian O’Conner: All of them.

Brian O’Conner: You asked me why I let Dom go. I did it, because at that moment, I respected him more than I did myself. One thing I’ve learned from Dom is that nothing really matters unless you have a code.
Mia Toretto: And what’s your code, Brian?
Brian O’Conner: I’m working on it.

Roman Pearce: You know, I think I make a better special agent than you ever did.
Brian O’Conner: I guess that depends on how you define ‘special’.

Fast and the Furious 6

Brian O’Conner: Maybe the Letty we once knew is gone.
Dominic Toretto: You don’t turn your back on family, even when they do.