Recently, all we’ve heard about Tila Tequila is her ridiculous social media rants, claiming to basically be Hitler reincarnated. However, some are saying it was just a publicity stunt to bring attention to her since she’s dropping a new sex tape. Others say Tila’s just nuts. Have a look at this somewhat strange clip from Tila’s new video with Vivid Entertainment and judge for yourself. 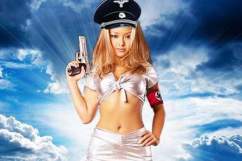 Tila Tequila Is a Nazi? in Shocking Anti-Semitic Music Video